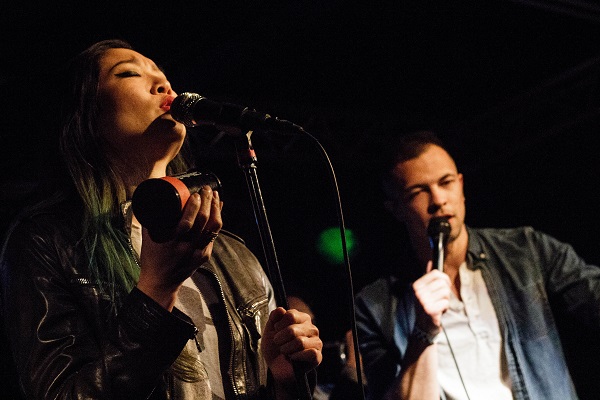 Up until recently, I didn’t spend very much time getting to know San Fermin very well. They are a baroque pop collective led by Brooklyn composer Ellis Ludwig-Leone. I knew them for their 2013 single “Sonsick”, which received plenty of XM airtime. I really had no idea how intricate overall the group really is, and seeing them live really opened my eyes to that.

First off, well-traveled folk singer-songwriter Sam Amidon warmed things up for us. He offered us some personality between songs, turning to a soft voice to tell us stories of his wisdom from his old driving instructor before jumping back into a musical performance that included his guitar, banjo, and violin. Amidon creatively ripped on his banjo strings, and almost comically dragged us through a violin number in which he created some “screeches” in between a display of string skills. It was a satisfying set and I’d love to catch him headlining a smaller crowded room.

Amidon paved the way for San Fermin’s set. With seven touring members on hand, there was a lot watch and plenty to hear. There was no real commanding stage presence throughout the set. Every member of San Fermin factored into the experience, and that’s something I love when bigger bands take the stage. Allen Tate and Charlene Kaye (who performs in an all-girl Guns N’ Roses tribute band called Guns N’ Hoses) each contributed contrasting vocals, which is very evident in the band’s full length 2015 release Jackrabbit.

Each vocalist was generally featured prominently on different tracks. Kaye’s euphonious voice was utilized in full force during “Philosopher”, my favorite track from Jackrabbit. Tate swoops in on songs like “The Woods” with some unexpectedly deep bass vocals. San Fermin gave some love to their 2013 self-titled release as well, incorporating some low-key tunes like “Methuselah”. Due to this, all of San Fermin’s sounds stayed fresh throughout their set. The merging of these vocals with their violin, saxophone and trumpet came with great cohesion. The track “Jackrabbit” sounded awfully majestic live, and the composition skills of Ludwig-Leone should be much accredited.