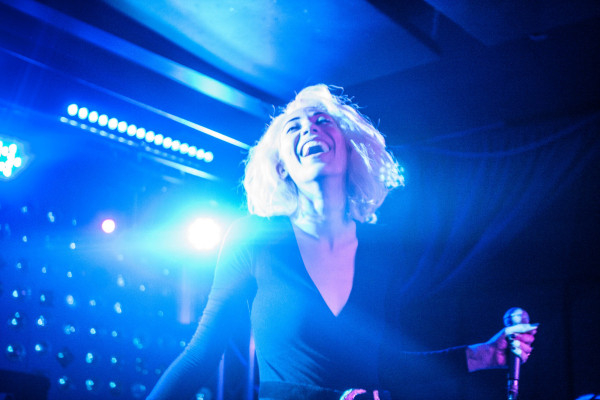 As the landscape changes around Williamsburg, Brooklyn, I’m more and more grateful for Baby’s All Right as a proving grounds for emerging acts. The venue celebrated a one year milestone last month, shortly after we caught Mr Twin Sister there. Last weekend, my curiosities led me to return, this time for an electropop flavored billing, featuring a variety of female-led acts that left me feeling quite auspicious for each come next year.

I heard of Oyinda via Kaiotic Music, who featured her in their CMJ showcase at Paper Box last month. Entering the stage draped in black garb, she cast a detached, imposing presence as she performed the first half of her set obscured from view. Her sound lands in the electronica r&b realm, and picked up a lot of steam when she cast off her garb. She just put out an EP, Before the Fall, curating her collection of released music; I really recommend “What Still Remains” off it.

Yumi Zouma are an import from New Zealand you also may not yet be aware of. The group’s got a stylish and smooth pop sound that is a pleasure to just take in, though dancing is very encouraged. Their debut EP came out via at the start of the year, and with a SXSW date booked in 2015, they are likely to follow up on that soon; their recent single “Alena” promises very good things from that.

Co-headlining the bill was Tei Shi, is a name that first popped up for me with a vocal feature on a Glass Animals track, “Holiest“. Since then she’s been on fire, getting out the killer singles “See Me” and “Bassically,” and starting an in demand live show off their momentum, which is buttressed by her EP last year, Saudade. “Bassically” has been one of my favorite tracks closing out 2014, with some really energetic and emphatic yells that would make for some challenging karaoke.

If you want to see her next, she’ll be playing Yellow Ostrich’s farewell show at Glasslands on 12/8. What may seem a bittersweet engagement has a silver lining, she has another vocal feature, “Fever,” on Yellow Ostrich vocalist Alex Schaaf’s new project, Human Heat. He just released a debut EP from the project, and its electronic focus would have fit right in here tonight.