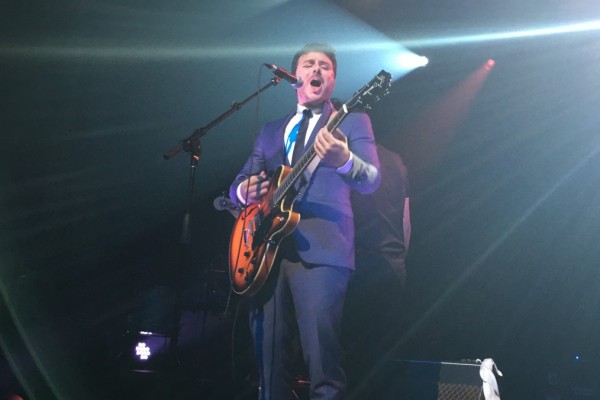 Any music lover will tell you that there are certain albums that transcend the ordinary humdrum of music listening and exist as something much more significant. Reasons and rationales vary on an individual level, but no matter how each of these albums came to be elevated, the immutable truth is that we all have at least one.

One of the few albums that fall into this category for me is the self-titled, 2006 release by the Long Island indie rock quartet As Tall As Lions. It’s a record that has gotten innumerable plays on my iPod/Spotify/record player since that time, and it recalls many positive memories for me during each spin. As Tall As Lions broke up in the fall of 2010 before I was able to see them live and hear music from that wonderful second album; however, through a very fortuitous turn of events, they decided to reunite for a four show mini-reunion, culminating with a final show the day before New Year’s Eve at Webster Hall. It was a collection of firsts for me (first ATAL show, first reunion show, and first farewell show), and the evening clearly established just how fervent the following is for the band.

Everything seemed to be heightened on both sides of the venue, as the crowd was bouncing with eager anticipation, ready to sing, cheer, smile, and/or cry at any moment, and the band was feeling it too, as the knowledge that this was their last show of this brief tour gradually seemed to sink in throughout the show. Once the cheering and screaming died down and As Tall As Lions could actually start playing their set, they obliged the crowd by doing something they said earlier in the month they might do–play their self-titled album front to back. This was clearly a surreal experience for me (and many others in the audience, I’m sure) as all of the memories and positive vibes that music had provided was now being played out in real time, buoyed by the energetic performance on stage, the booming bass from the speakers under the stage, and the fact that As Tall As Lions had 1,500 backup singers trying out their best falsetto to match lead singer Dan Nigro’s amazingly talented and passionate vocals.

For a record that was lamented by the industry at the time for having no marketable singles, it definitely has had a lasting impact, both for the band and its fans. Every song performed during their album playback was a highlight, but there were a few moments that rose above the elevated fray. Hearing “Stab City” for the first time, the album’s lead, was amazing, and even more intense and soulful than I ever experienced listening to the album. The single from the album, “Love, Love, Love”, was met with maybe the loudest singing by the crowd for the entire show, and “Ghost of York” was exactly what you’d want from a rock show, with Nigro’s soaring vocals paired with powerful percussion and guitar work.

The high point of the night came when Nigro told a story involving a MySpace message that was sent to them eight years ago which included a video that impressed them so much, they asked the musician to help them with their third album. He then invited that musician (who turned out to be Kimbra) on stage to help him sing “Where Do I Stand.” That proved to be the emotional tipping point for the crowd, as the beauty of the song along with the unexpected guest caused tears to well up in some of the audience. Kimbra herself was impressed by the response, as she flashed a big smile when hearing Webster Hall being filled with the collective voice of the audience. Finally, “Maybe I’m Just Tired” (along with the hidden album track “A Soft Hum”) had such a dramatic weight to it as everyone knew this magical album ride was coming to a close, and we wanted to hang onto every last note for as long as possible. In the end, an album that was already in my favorite five of all time became transformed even further, assuring me that goosebumps will be experienced during future listens for years to come.

As Tall As Lions + Kimbra

However, this was not the conclusion of the show, as the band came back out on stage to play more music from their other two full-length albums, as well as some from their 2007 EP, Into The Flood. Although there was no way they could have played everyone’s favorite songs outside of the previously played album, no one was disappointed with the selections the band chose, starting with the opening track from You Can’t Take It With You, “Circles.” As Tall As Lions’ history was marked by a lot of lineup changes since their inception, and in a rather impromptu way of honoring one of the original members, the band invited former guitarist Brian Fortune on stage to play “Break Blossom” with them. Originally the second guitarist in ATAL, which allowed Nigro to simply be the main vocalist, Fortune took a minute to find the right key with the band–this really was unplanned–before playing the very recognizable guitar riff that kicks off their first album, Lafcadio.

Nigro finally found time to take his shoes off (they were notorious for playing barefoot) before going into the final few songs of the show. Long-time bassist Julio Tavarez took time out to express his love for and thanks to Nigro, and each member of the band’s names were chanted by the crowd before they ended with the driving “In Case Of Rapture.” It was an inspired choice to close their final show, as the song is high energy, and the imagery of the lyrics is littered with finality, which oddly proved to be self-fulfilling as the band ‘went out’ on their feet. As Tall As Lions came out for one final bow to a roaring audience, then left the stage for the last time, and even though we knew the show was over, many in Webster Hall lingered for a few minutes longer to soak in the last remnants of the energy in our environment.

This show will go down in the annals as one of the best shows I’ve ever seen, and I can’t think of a better way to have capped off the year that was in 2015. So to Dan, Julio, Saen Fitzgerald, Cliff Sarcona, and the rest of the As Tall As Lions family, thanks for everything. It’s been real.

Stab City
Song For Luna
A Break A Pause
Love, Love, Love
Ghost Of York
Milk And Honey
Be Here Now
I’m Kicking Myself
Where Do I Stand
Maybe I’m Just Tired
A Soft Hum

Lost My Mind
Into The Flood
In Case of Rapture

The concert was amazing - as a father of one of the band members this was truly a treat - we started out watching what was the genesis of ATAL as a band of 16 years old kids from LI under the name SunDaze played bowling alleys and Sweet 16 parties - to see the maturity of each member was both a proud and bittersweet moment - these guys were good and so close to " making" it - We all enjoyed this as a family and can on;y hope that somewhere in the future they will get together again