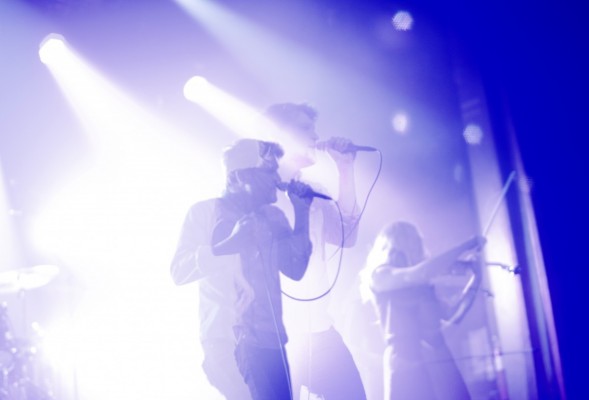 Ra Ra Riot recently roared back to recognition with their fourth album, Need Your Light[Barsuk]. The group’s sophisticated, yet bubbly take on pop music has been a stalwart favorite here among us at Neat Beet. Their appeal soars quite wide, as the band successfully sold out Webster Hall on their tour supporting this new record.

Not only are Ra Ra Riot celebrating a new album this tour, but also a decade as a band, an impressive milestone. The setlist touched on some old favorites like my personally beloved “Boy” or even some of Rhumb Line such as “Ghost Under Rocks”, as well as a smattering off 2013’s Beta Love. The strength of Need Your Light shined as its single “Water” was perhaps the most anticipated tune of the night to close out the main set, and its title track ended the show.

We also caught Baltimore’s Sun Club opening (but missed PWR BTTM, sorry homies). The group’s kinetic energy was unhinged and heavy, making them an interesting spectacle. They had a weird moment at the end where a drunken, shirtless man joined them on stage that I’m not sure was intended. Sun Club & PWR BTTM are en route with Ra Ra Riot to SXSW.