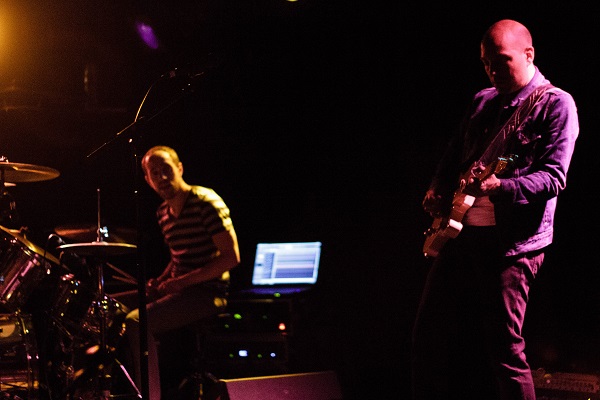 Father’s Day 2015 was capped with a mini showcase of the Portland, Oregon music scene featuring the likes of Lost Lander and The Helio Sequence at The Ballroom at The Outer Space.

Lost Lander opened the show bringing us a strong harmonic vocal arrangement featuring Matt Sheehy (a touring member of Ramona Falls) and Sarah Fennell. Lost Lander performed a sizable portion of their February 2015 full length release, Medallion. The keyboard heavy nature of their music generated some memorable riffs alongside perfectly audible vocals. “Walking on a Wire” and “Feed the Fever” exemplify what this band does right, and that is produce fun, wholesome indie rock.

I only recently became turned on to The Helio Sequence. Their self-titled sixth studio album is what truly did it for me. The combination of Brandon Summers’ soft but authoritative vocals and guitar coalesce perfectly. Benjamin Weikel brings a contrasting aggression on drums. His nonstop energy was great to watch live. Being the two members of the band, they’re the complete package and sound like they’re doing the work of four musicians.

Their live set featured tons of new material that I’ve grown to love. The “let it be” chants featured in “Red Shifting” were just as haunting to hear in person and their performance of “Stoic Resemblance” was equally strong. I was surrounded by a lot of Helio diehards and they were even more ecstatic to hear old school classics like “Hallelujah” and “Lately” from their 2008 album “Keep Your Eyes Ahead”. It seems as though this band, despite being active since 1999, is still picking up steam and shouldn’t be off the indie radar anytime soon.