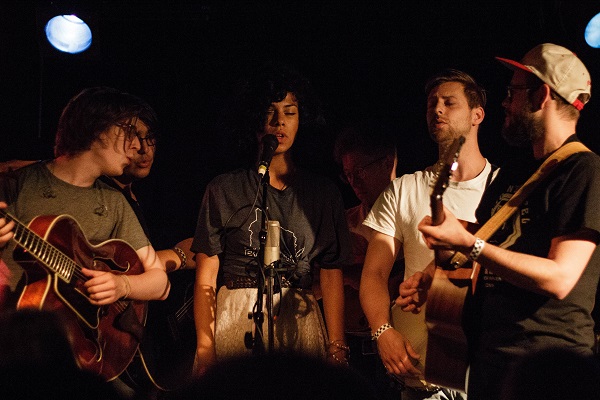 Walking into The Ballroom at The Outer Space last Thursday, the first thing I noticed were the shirts at the merch table. What caught my amusement was a PHOX shirt featuring an outline of their home state of Wisconsin and the wordmark “someone in Baraboo loves me”. Turns out, PHOX is collectively as rad and humorous on stage as indicated by their merchandise. I guess I wasn’t expecting such an engaging sense of humor from a band that produces such soulfully whimsical folk pop.

With great personality came stellar live music. Fronted by vocalist Monica Martin, who donned one of those aforementioned shirts mid-set, the group performed songs from their 2014 self-titled debut LP. All six members converged at the center of the stage at one point. We all took a big breath, and PHOX launched into some of their more subtle vibes ultimately leading up to a strong live rendition of their most commercially successful tune, “Slow Motion”.

Regional mainstay The Sea The Sea was the first opener. The folk pop duo, comprised of Mira Stanley and Chuck E. Costa, played a harmonious set in which they each contributed percussion while respectively playing guitar, keyboard, and even the harmonica. The Sea The Sea was indie folk simplicity and is well worth the listen.

I was also introduced to Mechanical River, an extremely interesting experimental folk due from Charleston, South Carolina. On vocals was Joel T. Hamilton, who ended up joining Monica Martin on stage for a semi-planned duet. Hamilton commanded the stage wearing some zany helmet-turned-microphone contraption that I couldn’t possibly put into words. If that wasn’t enough, his instrument of choice was a cigar box. Even more fascinating was how amazing that cigar box sounded. It was almost like a bolder version of a ukulele with some electric guitar zest mixed in. Mechanical River was folky and still loud, and brought a unique energy to the genre.

The Sea The Sea