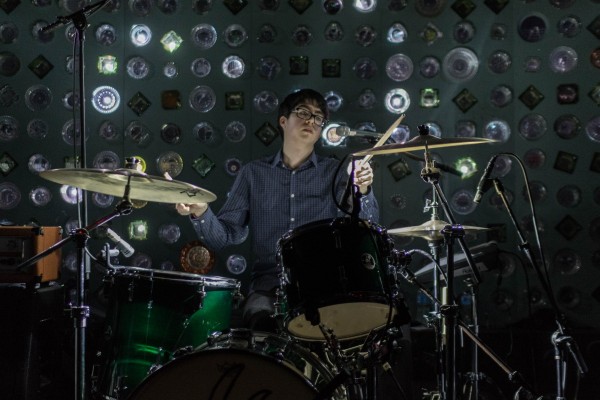 Baby’s saw a night of rising rock this weekend, starring the enigmatic Car Seat Headrest, whose merits sold out the venue. That band is the project of Will “Toledo”, a Seattle-based DIY musician who caught Matador’s attention with his prolific collection on Bandcamp and devotion to his craft. He released Teens of Style back in September as his label debut, which collects and polishes some of his back catalog’s gems, and will be following that in 2016 with newer material, Teens of Denial. Car Seat Headrest played a bunch of CMJ shows on Style’s release, and tonight marked a return for a proper headlining show.

I’m in the process of navigating his discography, having gone tonight naively assuming that Teens of Style was the beginning of the project and finding myself way out of depth with my peers in the front. Toledo definitely takes things with a lighthearted, irreverent air, using his own vinyl stock for a setlist (but not leaving it for the fans) and commenting during songs. His cover of “Psycho Killer” came in with a karaoke style “I can’t speak any French” which may either leave you incensed or giggling depending on how serious you take that stuff. I’m left critical of these behaviors, but I’ll be keeping an eye open anyway for next year’s release.

Chicago’s NE-HI played second and were a highlight for their souped up sound, loud vocals and revved up energy surrounding them. Check out their newest tracks “Turncoat” & “Drag” for the best insight into them. Supporting locally was Moniker.