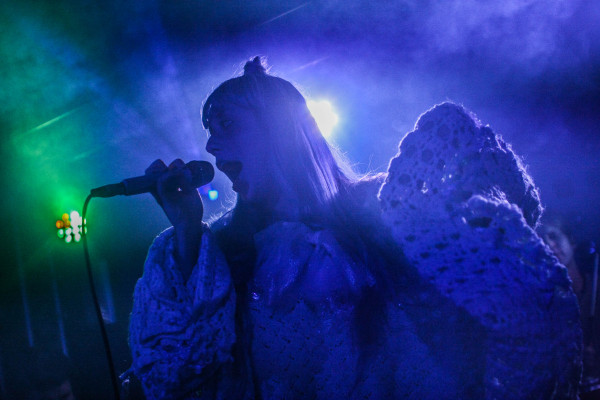 Twin Sister is now a Mister. The NYC based rock band’s name change seemed an ode to an identity crisis. Any doubts for taking such a severe action were dispelled with the success of their new, self-titled album. Along with that exists a tight live show that packed Baby’s All Right two nights consecutively with loving friends, family and fans.

Lead vocalist, Andrea Estella, seemed the personification of “Lady Daydream“, with a fantastic style of dress that absorbed the wild array of colors washing the stage. The other core members are Eric Cardona, who acts as co-frontman and human swiss army knife, Dev Gupta (keyboard), Gabe D’Amico (bass), & Bryan Ujueta (drums). Pablo Eluchans of Zula offered aux percussion, Felicia Douglass & Becca Kauffman of Ava Luna, who opened the Friday gig, provided backing vocals, and towards the finale, a string quartet (*) crowded the stage; a total of twelve performers were busy as the main set closed with “In the House of Yes”. The band would return to play 2010’s “All Around and Away We Go” for an encore.

The keys to the kingdom lay in Mr. Twin Sister’s hands. They’ve hit the rare milestone of being a truly acclaimed and successful independent band. There is a huge wave of momentum around them currently and I wonder if they will choose to tour on it or stay reclusive. People around the states need to see this band if the opportunity arises. Right now, their only scheduled live show is in Nashville later this month supporting Julian Casablancas+The Voidz.

Mr. Twin Sister picked some solid openers for the night. Moon King are a duo out of Toronto (Daniel Benjamin and Maddy Wilde) that rounded out to four with percussion and a second guitarist. Infused by the emphatic actions of each member in front of an upbeat rock sound, they gave a really convincing set. They’ll be back on the 22nd at Shea for CMJ. Obsession II is their latest release.

Zula played earliest, and they’ve been on my radar for a while since the release of their debut album, This Hopeful, last year. They were worth the wait. They’ve got a wacky tinge of experimentalism on the edges of a rock/pop sound. They kick around regularly here, their next gigs are on the 10th at Secret Project Robot w/ Lost Boy? & the 15th at Shea Stadium w/ Life Size Maps.