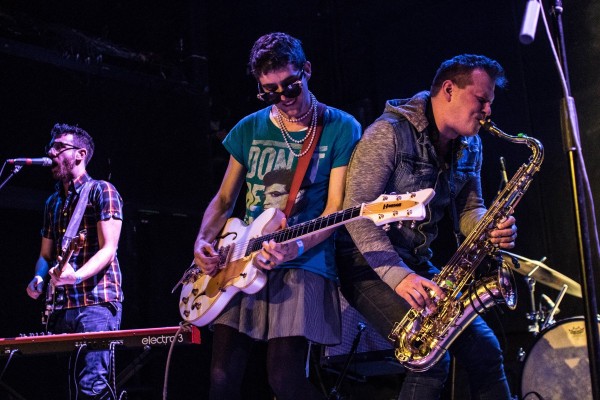 Ezra Furman’s third solo album, Perpetual Motion People, was a highlight last year for rock music fans. At first glance, the record gives off a vibe of a melodic, unhinged pop sound. It’s sublimity is that it’s far more than that, fusing classic era sounds against that energy. The point really comes across on gems like “Lousy Connection“, though the album shines all the way through. Ezra Furman played a bevy of shows here during CMJ and returned this week for a proper headlining show at NYC’s crucible for live music of merit, Bowery Ballroom.

Live, he rocks as Ezra Furman and the Boyfriends, which expands his live roster to five and brings all the instrumentation to life, especially noticable with an exuberant saxophonist that keeps up with Furman’s energy. Furman himself is a magnet for attention on stage, dressed femininely with a menagerie of intense expressions and in a constant motion that dazzled the audience. A sarcastic rapport with the audience culminated in a bubbly cover of Nirvana’s “In Bloom” introduced as an ‘oldies’ song, and sealed the deal for me on what was a successful engagement between audience and performer and a fine evening.

Ezra Furman’s remaining tour dates are below. He’ll hit up SXSW, journey to the Midwest and Southeast before concluding business at Oregon’s Pickathon festival.