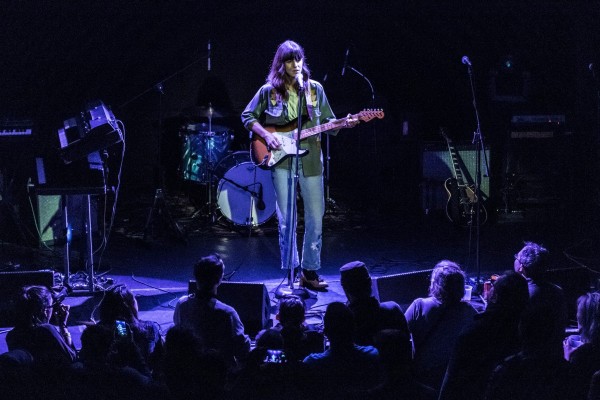 New York guitar pop fixture Eleanor Friedberger has been busy recently. Maybe you know her as half of The Fiery Furnaces from the aughts, but she is more known recently for her solo career, which just added its third album, New View, now on Frenchkiss Records. It continues her style of sophisticated, catchy music. Correlating with this release is a national tour, started this evening with a headline spot at Bowery Ballroom and continuing well into Spring, orbiting around SXSW.

Live, Eleanor Friedberger is backed by Ice Water, who opened the show on their own merits. The performances weren’t very flashy, just her and her band moseying on through the set at a comfortable pace. High tempo rock stardom or weird performance art; this isn’t either. Nor is it explicitly a negative, if you’re striving for a calmed, controlled climate. Sometimes, it’s good to take a step back from bombast and spectacle at a general admission show, and Friedberger offers that alternative with class in her music.

A pleasant surprise was in opening band, Big Thief. The Brooklyn project channels a lot of folk elements, and also has a lot of cause for jubilation. As of last week, they are freshly signed to Saddle Creek Records! Their live energy started off surprisingly slow and reserved, with singer Adrianne Lenker nearly motionless before building up over the course of the set. I have to say her bandmates makes some of the best, wackiest facial expressions. Further news surrounding their debut album is unrevealed. They’re riding the momentum by hitting SXSW and touring with Yuck, expect to hear more about them come Summer.