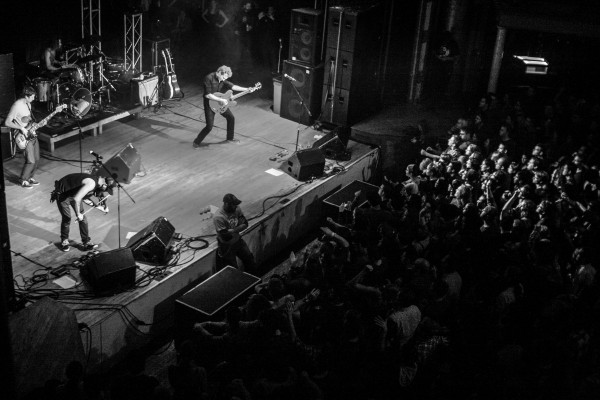 If you were cognizant of the indie rock scene a decade back, you probably knew of ZOX. The band, hailing from Rhode Island, put out three albums before calling it quits in 2008. Their songs have held a special place in my heart to this day. When I heard that they would be playing a one-off reunion show in their hometown of Providence, I knew I had to be there for it.

The venue was Lupo’s Heartbreak Hotel, a regular haunt for the band back in their heyday, similar in size to NYC’s Webster Hall. Two local bands would open as the venue filled up. The Sugar Honey Iced Tea, first, were four ladies with a wicked sense of humor once you figure out what their name abbreviates to. They had a twee/alt country sound, and worked in a cover of “Rocky Raccoon” towards the end of their set which sealed my affection. They released Silver Spells this year as their debut LP.

Neo Nouveau were second, offering a more conventional rock tune. The quartet’s been kicking it for a while, having material dating back to 2006, and they recently followed up with Action Figures last year. They brought the energy level up a notch and I particularly enjoyed their swagger.

ZOX is & was John Zox on drums, Eli Miller on guitar and vocals, Spencer Swain on violin, & Dan Edinberg on bass. They played a set in length of around ninety minutes as they would play hits that spanned their career as well as a few choice covers, the most prominent of which was The Pixies classic “Where Is My Mind?” as the show’s finale. Friends and family of ZOX filled the stage, singing along arm in arm and banging whatever instrument they could find.

Hearing all these long yearned for songs live was a transcendent experience for myself. I was even more ecstatic to see my joy reflected amongst my fellow audience members, many of whom had also traveled from far away. The pit area turned moshy fairly quickly and by the end of the night, crowd surfers were in abundance. It didn’t seem entirely appropriate based on how mellow much of ZOX’s music is, but in reality those are my favorite pits to participate in. The less physical audience members still shared in the mutual output of energy by singing all the lyrics to their most cherished songs.

There were also other unique participants who found their way to the stage for flashes of brilliance. During “The Squid“, a lad in a squid beanie surfed his way to stage and found himself arm in arm with ZOX violinist, Spencer Swain. “A Little More Time“, my all time fav track, featured a professional dancer pirouette her way from left to right. I was unsure if these were traditions or just random displays of awesomeness. I also don’t know when or if ZOX will play again, but should they, I will do whatever it takes to renew this energy.