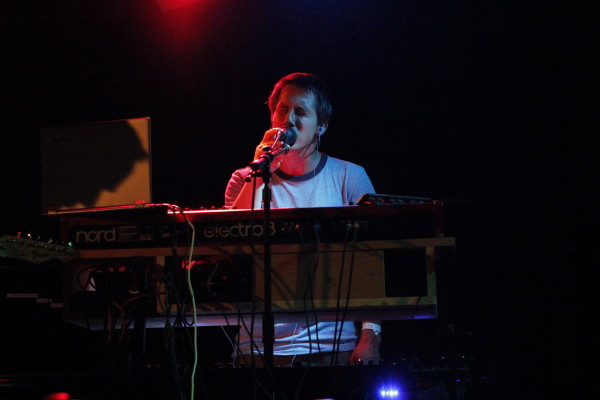 The Books have always been one of the coolest listening experiences I have come across. Their experimental style and samplings were totally fascinating, and their 2012 breakup was a huge bummer. At the very least, that paved way for other projects for the former members. Vocalist Nick Zammuto has wasted no time in shifting focus to his latest project, simply called Zammuto. The Outer Space in Hamden, CT was lucky enough to host his group on August 28 to help kick off their tour in support of sophomore LP, Anchor.

I’ve grown plenty familiar with the show’s opening band, Bethel, CT-based loom, over the course of the summer. Their chill yet commanding garage sound is a strong intro to almost any headlining band. The are capable of consistently delivering a pleasant live experience; very watchable, incredibly listenable. Some new material from them isn’t too far away and they’ll be back in Hamden on Halloween opening for a loaded lineup at The Space that includes Ex-Hex and Speedy Ortiz.

Nick Zammuto’s creativity reigned supreme as a member of The Books, and it is great to see that talent not going to waste these days. The Zammuto project has been compelling, picking up where he previously left off in his old band. Zammuto relies on calculated guitar and bass strumming while Nick provides additional sound support while keeping up with video backdrops that were present for most of the set. These visuals directly accompany the song being played. For example, their new track “IO” was written about a catapult the band had constructed, and the video itself showed off said catapult. Other visuals included their customary utilization of an infomercial for “The Stick” for one of their tracks. Its this kind of thing that makes the band different, and all of the more engaging.