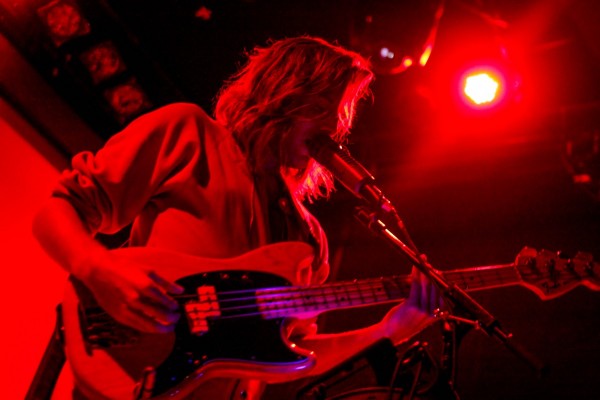 Oh what a difference a few months can make. I profiled electro-soul / graphic artist Young & Sick’s debut NYC show here four months ago, and since then the act has rapidly matured into an efficient entertainment machine. Their self-titled album hit in April as well, via Harvest Records, nicely bolstering the act’s collection of known songs. The band was on a short summer tour promoting it, with this night’s show its conclusion.

The banner prominently draped behind them at their last show has now been relegated to a spot at the merch table, as they’ve upgraded to using projected stills of Nick Van Hofwegen‘s art. Above the aesthetics, we now have a dedicated drummer, which is such a necessary component to get your band’s live sound in a formidable spot. The performance’s closing featured a violin against guitar duel. Young & Sick have gotten to be a tight performing act, and the future is bright for them.

The band is touring with Bent Denim, a New Orleans and Nashville based trio. They have been supporting Y&S along the entirety of this tour, and proudly sport his art as cover for their debut album, Epistolary. The band’s sound is somewhere in a lo-fi, chillout space, thoroughly doused with synths. I don’t think this is the kind of music that often wins people over who haven’t sought it out prior, with an obviously tempered crowd observing. But if Postal Service were opening your gig and no one had ever heard “The District Sleeps Alone Tonight” before, wouldn’t the reaction be similar?

Salt Cathedral, a Brooklyn electronic trio, were a last minute opener, assumedly brought on by Bowery Presents to round out the show. They followed Bent Denim and made the most of their opportunity with a lively and upbeat sound that quickly won over the audience. Their newest song “Tease” was perhaps their most distinctive, with its hypnotic “la la la” chorus captivating me and the rest of the audience. We’ll be following up to find more information about them and if/when they plan their debut.