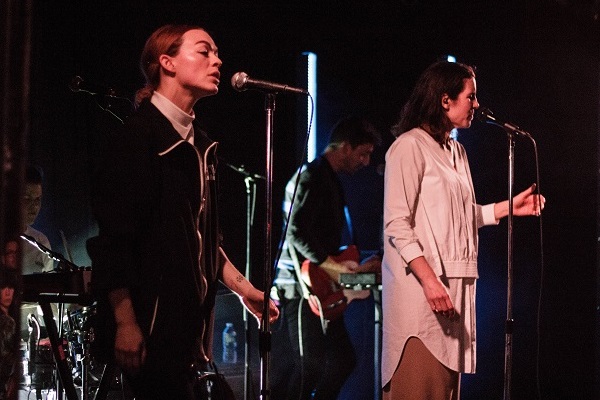 The evolution of Montreal-based band Young Galaxy has been stunning. Between their 2013 release Ultramarine and their 5th studio LP Falsework, released this past fall, the band has developed a unique signature electronic pop sound that suits them perfectly. I’ve discovered that their live shows are a special experience as well. They embarked on their North American Falsework tour a few weeks back at (le) Poisson Rouge.

Opening support came from a pair of local New York acts. First up was singer-songwriter Noy Markel, who took center stage while backed by her band. Markel flaunted a strong vocal range. Commanding the stage with gusto, she effectively appeared to own it, comfortably performing as though she does so at the venue on a regular basis.

Then we heard from Julietta, a group that projected strong pop sensibility in tracks stuffed with vocal hooks to hang on to and rad electronic beats. Check out “Conquest” and “Maybe”; two songs from the group that got me really amped to see them live. Like her fellow performer Markel, vocalist Julia Libani had an excellent stage presence.

As for the main event, I was anticipating something new and excited from Young Galaxy’s live show, and I was right. The last time I saw them a few years back, they were supporting their Ultramarine album and performed much of that on stage bathed in kaleidoscopic colors. This time, the live emphasis was not placed on the aesthetic appearance. Movement was key as lead vocalist Catherine McCandless immediately introduced us to a choreographed routine that was coupled with their set. With a backup dancer on support vocals, McCandless incorporated some light modern dance that flowed with the music, robotic but elegantly.

The dancing paired great with Young Galaxy’s Falsework. Shifting tempos and pleasently jagged electronic samples are plentiful on the new album. The variety in pacing  was perfectly clear between their performances of “Wear Out the Ground” and the long and loopy “Body”. McCandless and dancing partner were able to get into even more and have fun with the upbeat “Must Be Love”. It was also wonderful that they didn’t neglect their past catalog of material. As a huge fan of Ultramarine, I was stoked to see them perform “New Summer” and “Fall For You” live a second time.