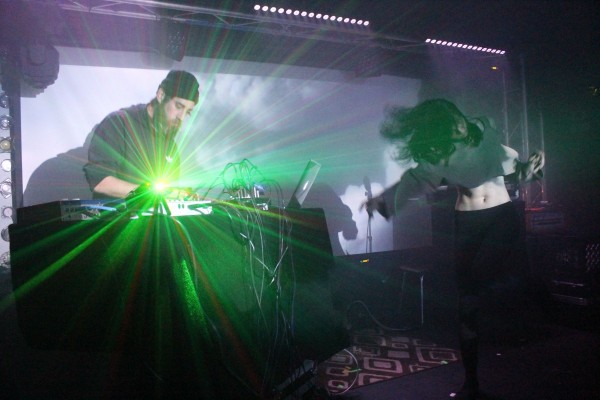 Some awful Friday night NYC traffic was not enough to keep me from my first Baby’s All Right experience (seriously?), as well as to be in attendance for Young Ejecta’s album release party for their second LP, The Planet. Young Ejecta is a synthpop duo comprised of vocalist Leanne Macomber and producer Joel Ford who we’ve previously seen in Glasslands’ final month supporting Chrome Canyon. This time they were the headliner to their own party, and provided the Baby’s crowd with their brand of slowed-down, spacey pop melodies and Macomber’s entrancing stage presence, performing roughly eight of their songs during their set, which was highlighted by the first single off of The Planet, “Welcome To Love.”

The set itself was slightly NSFW due to Macomber’s wardrobe choice, but this plays into the character (named Ejecta) she has created to complement the band’s music. According to Macomber, Ejecta is meant to be an everywoman who sings about loneliness, loss, confusion, and other related feelings, and as such, whenever she is photographed, she is completely in the nude. That wasn’t the case for their show, although having the chance to see her on stage really personified Macomber’s description of who Ejecta is and what she is going through. Seeing Young Ejecta is certainly an experience that you should take if given the chance, especially now that they have another announced show on April 29th at Bowery Ballroom (w/ Tei Shi and Shy Girls).

Prior to Young Ejecta’s set, electronic music producer Bruce Smear (who is Beach Fossils guitarist Tommy Davidson) played a fairly enjoyable collection of his music, which can best be described as a breakneck combination of electro, frequent sampling (especially of 90’s music), and random city sounds, all of which gave those of us at Baby’s something to dance to. Another addition to his set was the inclusion of three dancers who stood on stage in front of him and performed choreographed dances to the music he created, which provided a unique visual experience, especially when they jumped down from the stage at one point to dance with people in the crowd.

First on the stage was a band called Solvey, who I arrived to the venue just in time to catch the beginning of their set. Fronted by Jessica Zambiri (who is married to Hooray For Earth’s frontman Noel Heroux, who also performs in the band), their music showcases a slow, heavy bass guitar along with distorted electric guitar rhythms behind Zambiri’s vocals, and really calls to mind rock music you would hear in the 90’s. This was actually the band’s very first show, and was highlighted by their eponymous single “Solvey” and another cool track titled “The Wait.” Their set also featured guest vocals from Zambiri’s sister Cristi Jo and an appearance by Autre Ne Veut. It was pretty enjoyable, so look for more from them as we progress through 2015.