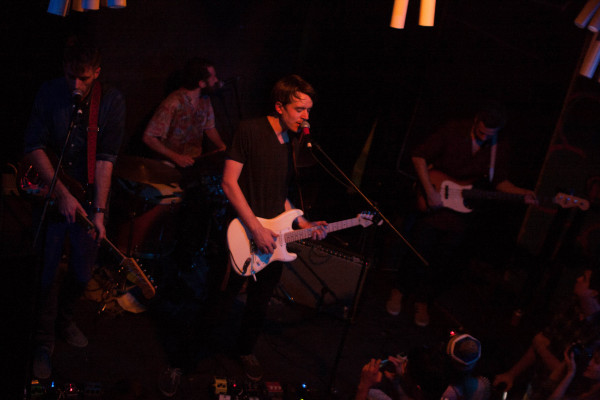 Brooklyn band Yellow Ostrich made a sudden announcement last month that they’d be calling it quits with a show during Glasslands’ final month. The group, which toured nationally over a five year lifespan, wanted to end things where they began, while they still could. Their final iteration was Alex Schaaf, Michael Tapper, Jared Van Fleet & Zach Rose. Dedicated fans of the project can hear some unreleased tracks on their Soundcloud.

The most distinct thing about Yellow Ostrich’s music was Schaaf’s dedicated use of looping vocals as a melody, most prominent in their first release on Barsuk Records, The Mistress. It really gave them a sound that stood out; it almost could be described as goofy if not for the sincerity of the lyrics and guitar work. You can hear this featured in tracks like “WHALE” and “Hold On” which both made it into their final setlist.

Yellow Ostrich’s music tended to err towards the mellow side, so for most of the set the sold out crowd had a solemn vibe. It was only towards the end that some dancing emerged, as energetic tracks like “Marathon Runner” and “Hate Me Soon” were played. Yellow Ostrich’s final song would be “Mary“. With a chorus of, “everything turns around…”, it felt appropriately morose to conclude with.

Tei Shi (Valerie Teicher) has a vocal feature on Schaaf’s new project, Human Heat, and joined the bill through that friendship, though we didn’t hear “Fever” tonight (I’m sure we will soon). I definitely lucked out having the opportunity to see her band play consecutive NY shows. This performance featured a heavily altered version of their trending single, “Bassically.” The guitar and drums went totally overkill as the song amped up, taking things over; I loved it as a cathartic form of experimentation.

In the middle of the bill was the Philly-based, psychedelic folk, trio, Norwegian Arms, led by Keith Birthday. He wields a mandolin with finesse, and the band had the lightest hearts of the evening, joking and bantering amongst each other. The group’s working towards a new album next year, recently releasing a double single in promotion of it.

The show opened with Belle Mare, a dark and gloomy quintet helmed by Amelia Bushell & Thomas Servidone. It was my first exposure to their music as well. I am really digging their EP, The Boat of the Fragile Mind, which is full of melancholic vocals and guitar work; I’m looking forward to what they plan on following up with in the new year.