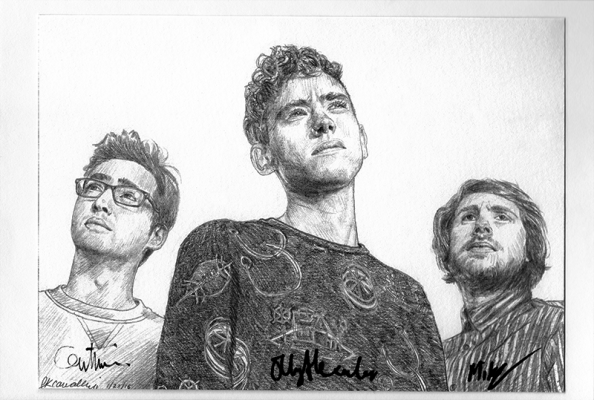 The weather on March 31st might have called for scattered showers, but that did little to dissuade excited Years & Years fans from queuing outside of Le Poisson Rouge hours before doors opened. Despite being sold out, many waited for hours on line in the hopes of finding extra tickets. This wasn’t unlike the first gig the band played in New York, as a dedicated crowd bore the aftermath of the short-winded snowpocalypse in order to see them play Rough Trade in January. The set at Le Poisson Rogue was received by a gracious and enthusiastic crowd of people, who gleefully moved together in spite of being crammed up against one another. Lead singer/songwriter Olly Alexander seemed much more confident than during their previous Brooklyn show, filling up the stage while he bantered and danced with the audience.

The newer additions to the set list helped flesh out and balance their roster, while Alexander’s charismatic performance and energetic rhythms provided by Emre Turkmen and Michael Golsworthy captivated the room’s attention. Before the show began, the merch table distributed paper crowns as a means of promoting the band’s latest single, “King,” and by the time they wrapped up the night with the track, Alexander had donned one himself. All in all, with sweaty bodies waving their arms in the air and voices from the audience intermittently drowning out the singer’s own vocals, Years & Years delivered an impressive and memorable show.

With this in mind, it’s unsurprising how, in the short time they’ve been a group, the three piece have amassed a formidable fan base that stretches the globe. It seems that others are starting to take notice, too. Years & Years have been steadily finding themselves featured in showcases, various publications, top ten charts, awards shows, as well as being lauded by high profile artists such as Katy Perry and Sam Smith. It’s clear Alexander, Turkmen, and Golsworthy’s mix of somber lyrics and upbeat, electropop beats have struck a chord with audiences worldwide, and with the June 19th release of their first LP, Communion, under Polydor, they’re sure to continue to attract even more fans and potentially become a household name.