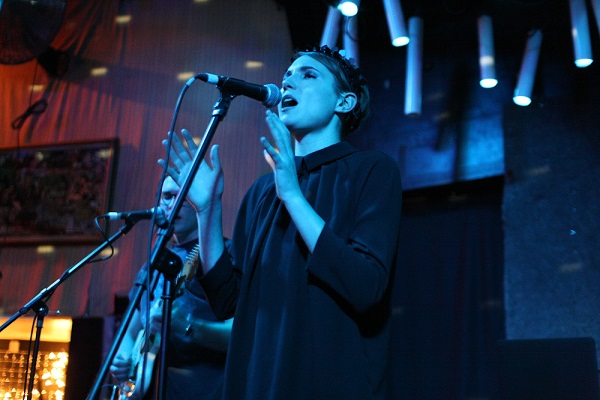 Woman’s Hour are the latest in an exciting resurgence of smoothed out pop music that’s been spreading like wildfire lately. Catching the video for “Her Ghost” was all I needed to get me on board the hype train. The London four piece made their US debut last week with a couple of shows here in NYC. I caught the second of them at Glasslands.

The music of Woman’s Hour definitely fits well into the realm of the downtempo. That doesn’t prevent dedicated vocalist Fiona Burgess from grooving away. The instrumentation from the rest of the group is tight too, though being sans percussion hurts a bit. Their set traveled through a myriad of yet to be released tracks (most are on their Soundcloud) as they ready their debut album. Heads will be turning when that hits.

Jenny Hval co-headlined the show. The singer hails from Norway and delivers music that is dark and minimalist. Some of her tracks edge close to spoken word in delivery, while others resonate around her vocal strength. Live, she teamed with a dedicated guitarist to add credence to the instrumentals, which definitely worked to her advantage. Jenny Hval returns to NYC in support of Swans on May 18th and 19th.

Brooklyn locals Future of What opened the show. The synthpop trio formed two years ago, and are gearing up to release their debut album later this year. “The Rainbowed Air” is their only available track online currently and is a very promising start. We’ll be keeping tabs on them as its release looms.