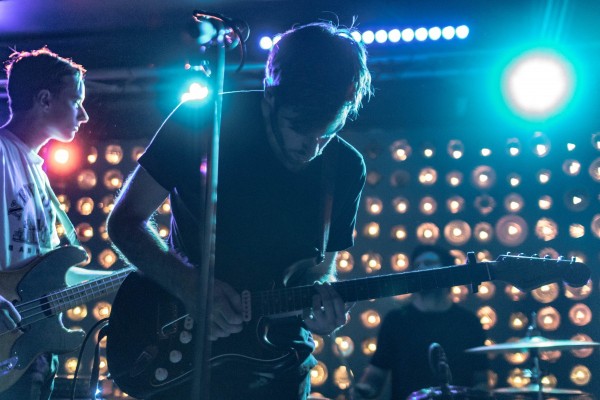 Ruminating on things I was thankful for over the weekend, what was most immediate in my mind was Wild Nothing’s hot ticket gig at Baby’s All Right. The dream pop project, helmed by Jack Tatum, have been in regular rotation for me since hearing 2011’s Nocturne. At this show, which is a small venue for them, they played some new tunes. They took things a bit further not only by properly announcing a new album in 2016 (Life of Pause [via Captured Tracks]), but also giving away a vinyl single. I got the last one on my way out the door.

The energy level of a Wild Nothing show goes at an interesting pace. The instrumentation was on point, and my expectations for the crowd being blissed out and immobile didn’t ring entirely true. Songs like “Only Heather” resonated and created some motion. I hope the songs of Life of Pause once we’re familiar with them can further harness that live energy. It’s off to a promising start.

Alex G, a rising star in the world of lo-fi rock, opened the gig. Part of what made tonight’s event so sought after is that he of his own accord sold out multiple shows at Baby’s last month following the release of his album, Beach Music, on Domino. His music, which veers into the emo territories, for better or worse, isn’t precisely my cup of tea, but the deadpan sarcasm of his stage presence held a humorous appeal.