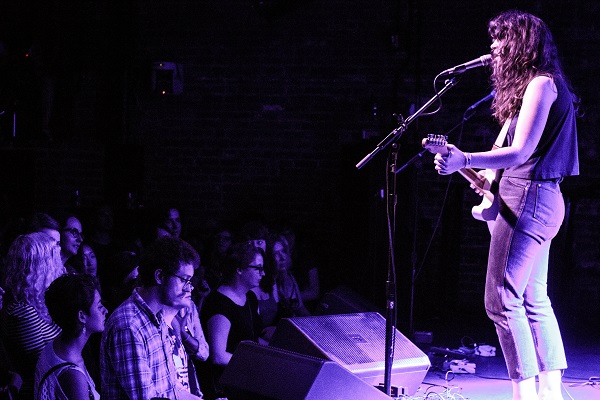 There was something for everyone at Brooklyn Bowl last Tuesday. Fans of all walks of the indie scene had grooves to sway to. Eternal Summers supplied us with a dreamy lo-fi cocktail to start out with. The dance portion of the evening came next with the chillwave aficionados that comprise Small Black. And finally, Widowspeak completed the night with their mixed bag of indie tricks.

I had been looking forward to seeing Eternal Summers since I heard their track “Gouge” last year. Now, they have an all new full length album called Gold and Stone under their belt, which they primarily focused on in their opening set. The Virginia “dream-punk” group reminds me of a fuzzier version of Tennis that is more willing to shred on guitar and get more creative instrumentally. Listen to the title track of their new record and tracks like “The Roses” and you’ll likely be drawn in by Nicole Yun’s pleasant vocal hooks.

Small Black has been one of my favorite groups for years now, and one of Brooklyn Bowl’s biggest indie veterans. As usual, they brought us a lively set. If you ask the dancing dude that was flailing wildly next to me, he would surely affirm my claim. They also shared a brand new dancefloor ditty with us for the first time which has whet my appetite in anticipation of new material from them. I’ve already spoken highly of them in the past, and things haven’t changed. We were also reminded that although it may fly under the radar, “Proper Spirit” is an ultra-rad live track. The downside of their performance is that their electronic base sort of meandered off into far reaches of Brooklyn Bowl’s open venue space.

With some new tracks floating around the internet, Widowspeak concluded the night. They performed “All Yours” and “Girls“, among plenty of other well-known songs of theirs. “Girls” could develop into a powerhouse track, featuring a tantalizing guitar solo from guitarist Robert Earl Thomas and the kind of harmonica that you walk off into the sunset to. The western flair of these new songs sound amazing and could command some attention when their forthcoming fourth studio LP is released. All Yours will hit shelves on September 4th via Captured Tracks. Other than that, Molly Hamilton, Thomas, and company touched on most of their existing material. They had the crowd audibly pleased when they played fiery tracks from Almanac like “Perennials”.

Albeit, it was an interesting bill that you’ll rarely see. But sometimes a hodgepodge of musical styles tossed into a simple one night show is just what the doctor ordered. This was totally the case.