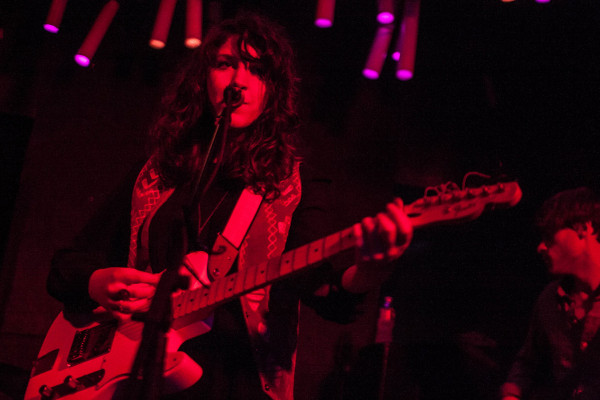 In what will wind up being my penultimate night of Glasslands coverage, I opted for a night of inspired rock music. On a good day, you can call the music of Widowspeak and Quilt folk, but their styles are each unique enough that the label only loosely applies. I’ve been vying to catch Quilt in particular all year, but things never lined up quite right until tonight. I was stoked to catch them alongside Widowspeak in a killer one-two punch.

I caught What Moon Things early (but missed Shana Falana, sorry guys.) The trio of rockers hails from upstate, near New Paltz. The guys here have a spaced out, fuzzy, and abrasive sound, which you can hear off their self-titled album they released this year. It’s not all snarl either, there are a lot of comfy pauses that evoke the calmer parts of the alternative rock / grunge sounds of the 90s’ & 00s’.

Quilt are a quartet out of Boston, who put out a killer record, Held in Splendor, earlier this year. It’s their second effort for Mexican Summer. There’s a slight tinge of psychedelia that really gives them a standout sound, and bolstering that with all instruments firing and vocals harmonizing, they certainly don’t want for energy. Quilt’s Anna Fox Rochinski would later join Widowspeak on keys and backing vocals.

I hadn’t seen Widowspeak since they were touring their first record, which still stands as a favorite of 2011 for its moody and rustic soundscapes. Almanac, which they released last year along with The Swamps, have really bolstered their library. Watching them live again, I was most interested in how their guitarist, Robert Earl Thomas, experimented. A lot of the tracks that I thought I knew well journeyed off in bold directions. The experimenting works for me because Molly Hamilton, and the band behind the duo, kept things leveled and familiar at the same time.