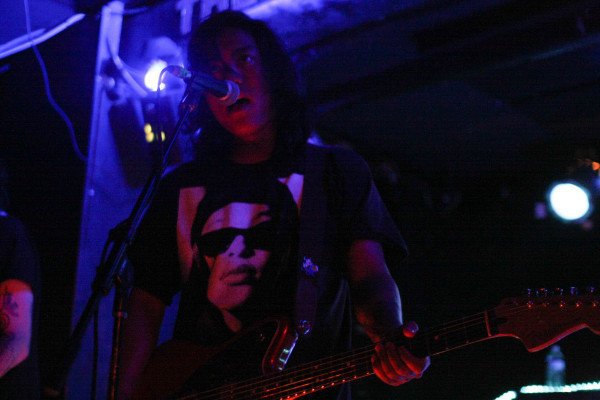 Earlier this year, I encountered an assertive band in the shoegaze realm by the name of Nothing. They impressed me with their encompassing and furious instrumentals so much that I looked into their history and discovered Whirr, with whom they share a guitarist, Nick Bassett. They’re quite similar sonically, and my fandom of one quickly became a duality. Whirr recently joined the misfit cast of Graveface Records, and are releasing their sophomore album, Sway, under that label today. I caught them at a packed show at Webster Hall’s Studio, where they are successfully riding a good wave of hype around its imminent release.

Live, they play with the lights off and all visual aspects diminished. I assume that this is so that we only focus on the soundscape they labor hard to create. It’s a wash of noise that will blow off your eardrums, drum kit flaring, and four guitars blasting. Any vocals, which are sparser on their new record, are almost entirely lost in it. They played encoreless, closing with the sentimental and forceful “leave” before disappearing sans ceremony.

Sannhet played before them, and were the only local band on the bill. The instrumental-metal trio offered the most compelling visuals of the evening, blinding strobes and light projections enhancing their aggressive sound. A fine discovery, and they have a few further upcoming dates soon at Saint Vitus. They have one record to their name, Known Flood, and another on the way next year.

Cloakroom, second on the night, hail from Illinois, and do slowcore well. A trio also, they hit some heavy notes live, but sound a lot more downtempo, almost folk or ambient, on their bandcamp. They are signed to Boston’s Run For Cover Records, an esteemed indie label. Cloakroom, and the first opener, Sad Actor, are tourmates with Whirr for most of their remaining dates. Showing up early for Sad Actor was worth it, they are Philly punks through and through.

Folks interested in seeing these bands performances should check out the video streams of unARTigNYC and Pit Full of Shit who both provided high quality video and audio capture of the night.