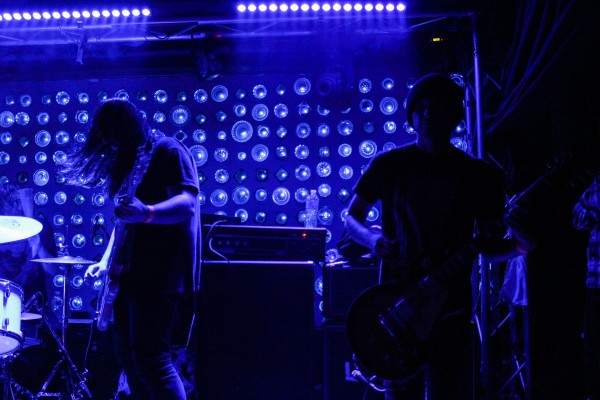 San Francisco shoegazers Whirr went on tour on April and stopped by Baby’s All Right, bringing along with them melodic punk band Adventures and Swedish dream pop darlings Makthaverskan (who were announced as a special guest on the bill).

Makthatverskan opened the show with a lot of energy. This was one of the first times the Swedish quintet played in New York and it was one the best opening bands I’ve seen in a while. I’m still new to their work but I immediately fell in love with their attitude, the intense guitar shreds and noise pop combined with punk sensibilities. It’s the kind of music that reminded me of my teenage years, and Maja Milner’s honest lyrics and fierce performance carried me through their entire set. Their latest album, simply titled II was released last year and I highly recommend it.

Adventures played next, the band consists of three members of a metalcore band called Code Orange. They’re the sweeter alternative to that band, with a lot of catchy choruses and a more melodic side. Their music falls somewhere in between emo and alternative rock with a feel good sound. They have a new album, titled Supersonic Home.

Whirr closed the show, but before they started their set, the lights on the stage went out due to a malfunction, which left the crowd in a fun daze and once the power came back on, they were as loud as they could possibly be. Infectious guitar shredding, piercing drum kicks and obfuscated vocals were on an all time high for the shoegaze headliners. Showcasing what they do best in a stage full of fog and lights, a very appropriate visual presentation of their sound. You can check out their most recent EP, a split with the band Nothing, here.