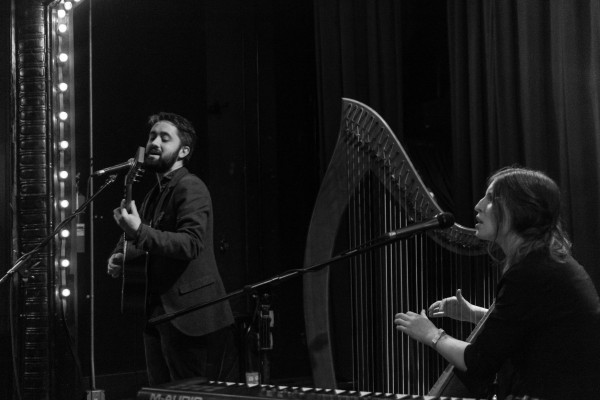 Villagers, the project of Irish singer-songwriter, Conor O’Brien, has been well known among fans of the indie folk scene for his two stellar records in the past five years. He’s about to add to that discography with his third album, Darling Arithmetic (via Domino, 4/13.) In advance of its release, he traveled across the pond for a couple small shows to preview its material. Union Pool was a fairly intimate set for him, having played Bowery Ballroom two years past with a full band.

O’Brien was joined only by a harpist. The duo played a long set, about half of which was choice picks from his two previous records, interspersed with everything new and exciting he’s been working on. Darling Arithmetic is being promoted as a bare album, and its sounds totally shine with a plugged in acoustic and vocals alone. “Courage” is its lead single and a powerfully stark anthem.

I really am thankful for every opportunity to see accomplished artists in a small room like at Union Pool. Tonight’s show really felt human, especially when O’Brien derailed an earlier hit, “Twenty Seven Strangers,” to point out the song’s phallic lyrics; the laughter was infectious throughout the room. On the serious side, “The Waves” from 2013’s {Awayland} blindsided me as a very powerful moment in its extended closing crescendo.

Fans of folk who may not want to worry about import tariffs should pay Zachary Cale a heed. The Brooklyn singer-songwriter played an acoustic solo set to open up the gig. He plays a full band set next on April 2nd at Cake Shop. Low Light Roughs is his latest release, a raw demo version of his 2013 record, Blue Rider.