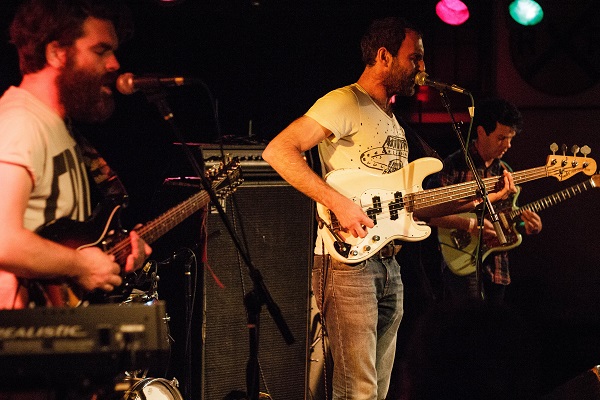 Canadian post-punk band Viet Cong has done their fair share of pot-stirring over the last year, mainly regarding the controversy surrounding their name. Speaking as somebody who is more concerned about the music they make, the only real pot they’ve stirred is that of the indie rock world where their January self-titled debut album remains one of my most played records of 2015. Its seven tracks have a distinct post-punk buildup that charges its engines for a full on release at the end with the powerful “Silhouettes” and a frantic 11-minute explosion that is “Death”.

Fortunately, their live set is not much different than their album. They eased into things and finished with a bang. Sprinkling in some older tracks of theirs, Viet Cong touched on the highest of highs from their latest release. “Bunker Buster” and “Continental Shelf” we’re mixed in to keep things fresh. “Death” made for the perfect closing track, with its jolting bursts of guitar that follow and precede more energetic breakdowns. Formerly of Women, vocalist/bassist Matt Flegel and drummer Mike Wallace carry over plenty of art rock values that put that band on the map and their live show helps you reminisce of those days. Listen to their record and see them live if you are into bands like Joy Division or if the thought of a heavier more dynamic version of Interpol tickles your fancy.

We were treated to Girl Band from Dublin as well, stopping in Connecticut before having headed up to Canada for North By Northeast. Not really a girl band, they performed an aggressive set spearheaded by vocalist Dara Kiely’s throaty screams blended with twisted experimental guitar. Bassist Daniel Fox won my award for most innovative use of an empty beer bottle. He’d slide the glass up and down the strings to generate a deep reverberating effect.