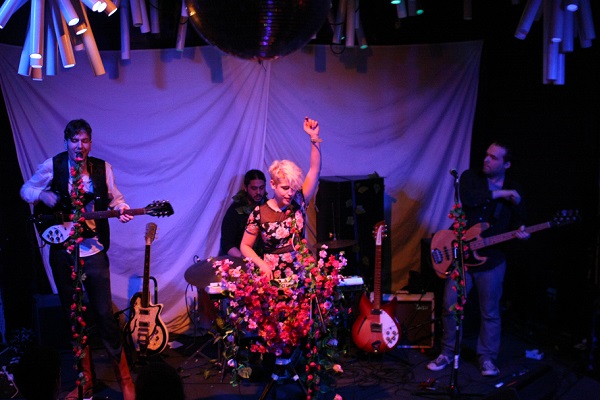 We’ve been talking about Via Audio a lot here lately. The band independently released their third album, Natural Language, after an enormous amount of effort. It all led up to this show here, where Glasslands played host to their album release party. Via Audio still had one big secret left to reveal though, and that is singer and keyboardist Jessica Martins’ departure to the West Coast. The release show had every vibe of a farewell, but that did not prevent it from being a warm party for all involved.

Via Audio brought along some of their best friends to play alongside them on this evening, Spirit Kid and Elizabeth and the Catapult. Their connections all go way back to when they all resided in the Boston music scene together. It was actually mentioned that the musicians had all played together eight years prior with the same lineup. Both bands are also celebrating recent album releases, as if they needed to be any more in sync.

Spirit Kid is fronted by Emeen Zarookian, and makes music that channels the spirit of power pop and garage rock. They joined Via Audio as a one-off for this special show. The quartet uses the standard rock formation most of the time live, and also includes some solid vocal harmonies and occasional keyboard melodies. They released Is Happening last month, which is officially their sophomore LP.

Elizabeth and the Catapult have been touring with Via Audio all throughout the last month, and are continuing with them on their journey westwards. The band is the project of pianist and singer Elizabeth Ziman. Live, she takes turns playing solo and also backed by a full band, which occasionally included Tom Deis of Via Audio on bass. My favorite moment of her set had to be her cheesy ode to Ryan Gosling. She released Like It Never Happened in January.

Via Audio bedecked Glasslands’s stage in flowers, complimenting the visual theme in Natural Language. The duo share vocal duties well; it was very infrequent for one to be singing at length without the other. The new songs are strong additions, especially their lead single, “Boat“, which was furiously energetic live. As the set wound down, the band invited all their friends on stage to help them with their biggest song, “Developing Active People“, before concluding with melancholy tracks “Happening” and “Olga“, which was the sole song in their encore.

No one is too sure what the future holds for Via Audio following their California shows this month, but given the bicoastal split and the lack of attention they’ve received for Natural Language, things look bleak. The Glasslands show was announced as their last here for a long time. Ryan Bradley of The Awl wrote a superb piece a few days ago summing up the history of Via Audio better than I ever could in the scope of this review, and I recommend reading it for those who want a proper closure should this be the end.

Elizabeth and the Catapult