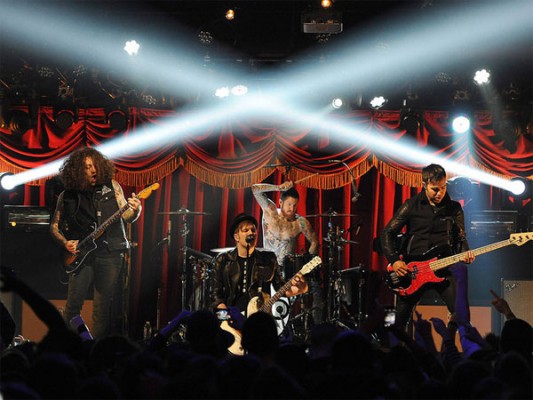 When I announced the “Monumentour” amphitheater tour with Paramore and Fall Out Boy co-headlining, I immediately bought tickets. But I never imagined that I would have a chance to see the artists a lot sooner than the summer – and in a much smaller venue.

Famed music video-turned music-reality TV network VH1 (remember when ladies could vie for the hand of Flavor Flav on “Flavor of Love”?) had a week-long party celebrating the very fact that the Super Bowl was happening in New York. (or New Jersey, depending on who ask) Each night, they hosted a free concert at a famed venue in each NY borough. (and one in NJ) They shuttled in great talent. J.Cole, TLC, Goo Goo Dolls, Gavin Degraw and my musical sweetheart, Janelle Monáe, were among the artists that played.

But it was Fall Out Boy’s performance at Brooklyn Bowl that was the hottest ticket in town. In addition to being at one of my favorite venues in general, it was by far the smallest venue listed.

The band’s performance on January 29 was aired on VH1 live and whether you were one of the approximately 400 people who braved the single digit temperatures in-line at the venue or laying on the couch, there wasn’t a bad spot to see them. While I have never seen the band perform live until that night, I was very impressed with the band’s stage presence and energy. They were so good, that it was almost like they never left in 2010.

I’ve been a part of a few TV performances and Fall Out Boy did something I had never seen done before: they had chemistry with the audience and the cameras. Even the audience involvement was genuine and not “faked” or amplified by the cameras. It’s not everyday you see a man in a beard comparable to a volleyball-loving shipwreck victim in Cast Away sing and dance at a Brooklyn show.

While I did find it a little disappointing that the energetic performances were drained by commercial breaks, the band brought a few surprises with them. Most notably, Paramore’s vocal powerhouse Haley Williams joined Stump on vocals for “Sugar, We’re Goin Down”. The band also made sure to leave no stone un-turned, covering the hits from their recent effort Save Rock and Roll and went as far back as From Under The Cork Tree.

The action-packed set list for the show is below.

The Phoenix
This Ain’t A Scene, It’s An Arms Race
A Little Less Sixteen Candles, A Little More “Touch Me”
Alone Together
Dance, Dance
I Slept With Someone in Fall Out Boy and All I Got Was This Stupid Song Written About Me
Young Volcanoes
I Don’t Care
Thriller
Sugar, We’re Going Down (feat. Haley Williams)
Thnks Fr Th Mmrs
Just One Yesterday
My Songs Know What You Did In The Dark (Light Em Up)