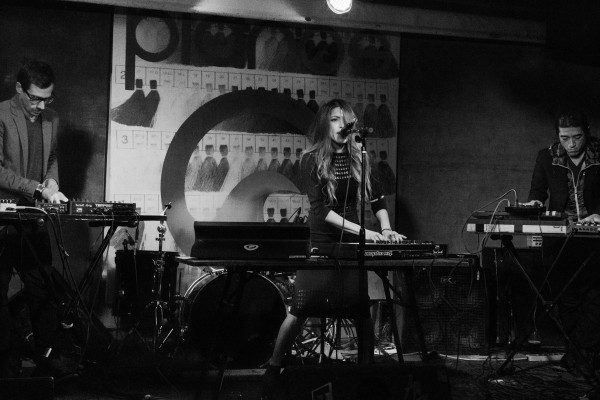 Live at Pianos last week was Vandana Jain, who gets a lot of respect from me as the frontwoman of an all analog electronica group live. Ominous, dire synthpop is the name of her game and she definitely exceeds at weaving a soundscape to match it. Since 2013’s Anti Venus, she has been at work on its followup, and we had the opportunity to glimpse some of its radiance, along with an on point re-imagining of Radiohead’s “Lotus Flower.”

Tonight was not only an occasion to debut new material, but also a farewell for collaborator Yusuke Yamamoto. He will be focusing on operations surrounding his proprietorship in Anchor Coffee and also his work with alt-theater hit, “Sleep No More.” Ryan Casey, who rounded out the live trio can be caught with his primary project, Kodacrome, this Saturday at Cameo Gallery. The duo recently put out After Aftermaths, an aptly titled EP of oddities from their debut record, Aftermaths.