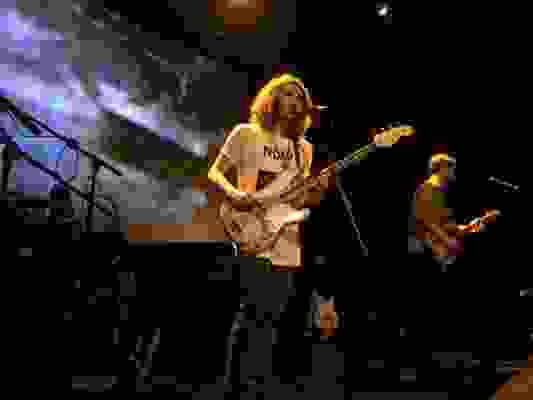 Shortly before the first significant snowfall of the year in NYC, the Bowery Ballroom faithful were treated to the warmth and good vibes of Vacationer. A mixture of Philadelphia and Brooklyn bandmates fronted by Kenny Vasoli, Vacationer helped those in attendance forget all about the freezing temperatures performing what Vasoli lovingly titled a “chill rave,” full of music with heavy tropical influences and moving images that call to mind summers gone by.

Having released their second full-length LP, Relief, in 2014, the front half of Vacationer’s set was loaded with songs from that album, starting with the final track “Onward & Upward,” which was exactly what Vacationer did throughout their show. Slowly peppering in tracks from their debut album, 2012’s Gone, Vacationer seemed to speed through nearly 20 of their songs over the evening, although it really only felt fast to us because of the pleasant feelings and island melodies their music elicited. Deciding to forego the traditional script of the “leave and come back” forced encore for simply continuing to play more music to keep the party going, Vacationer played three more songs (all from Gone) before departing the stage for good, leaving all of us feeling blissful and carefree as we wandered outside into the winter we forgot about for a few hours.

On stage before Vacationer was a Washington, DC dream-wave duo named GEMS who paired their black and white themed visuals with dark, sexy electronic music. GEMS is a band I had been waiting over a year to see live, so having them as an opener was definitely a treat. They played every song off of their 2013 EP, Medusa, as well a couple new songs from a new album the duo is currently working on, including one which they stated was the first time they’d played it live. Unfortunately they didn’t mention the name, but the new songs they performed showed some nice progressions from their earlier work, and I’m excited to hear it in full when it comes out, supposedly later this year.

Opening the evening was a very enjoyable set by Brian Bonz & The Major Crimes. A Brooklyn native, Bonz played a stripped down set compared to his usual shows, with only a bass guitarist to assist him, but it was some of the stories and conversations he had that really endeared him to the audience. Quirky, offbeat, and a ton of fun, Bonz’s music and stage presence was a great start to the evening, especially his song about nearly getting knocked down by Jesse Eisenberg on a bike in Alphabet City, which he claims was absolutely a true story. If you get the chance to see him perform, you’ll be in for a good time.