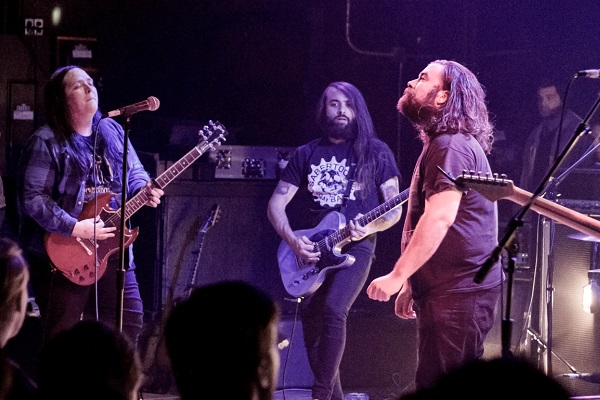 At ten minutes to 7:00 I left my booth at the York Street Noodle House and started the stroll to Toad’s for TWIABP’s record release show, their final tour stop until they hit Europe in 2016. On the sidewalk I ran into Derrick Shanholtzer-Dvorak – TWIABP’s guitarist, vocalist, label-owner and showrunner – hanging around with some familiar locals. I stood and talked with them while Loner Chic soundchecked and thought back to the last time I saw The World Is, back in 2013, when they played with Owen and Old Gray. Loner Chic’s set started a minute later.

Loner Chic is the pop-punk project of New Haven’s own Chris Cappello. With Brian Grochowski and Peter Stroczkowski of Setsuna on drums and bass, respectively, Loner Chic contrasts Cappello’s melancholy solo work, furiously upbeat and energetic. They toured with Milkshakes in summer 2014, promoting their Pretty Void EP, and again this past summer, successful but for the startling combustion of some vital elements of their tour van. They kick off their third year with the February release of their debut LP, Year of the Goth, on Broken World Media.

Fresh off pressing their first 12″ record (I Made You Something, Broken World Media), The Island of Misfit Toys came from Chicago with nine talented musicians in tow – one-upping TWIABP. Just when I thought it couldn’t get cooler, Sanders switched off his gentle indie rock vocals and started screaming. The crowd loved it. Misfit Toys has made some new friends in New Haven.

The oddball on the bill was Old Wounds, a hardcore band from New Jersey. Despite the indie vibe of the night, Toad’s was prepared to do a little moshing, and Old Wounds delivered a heavy, fuzzed-out set with manic energy. Kevin Iavaroni’s vocals and the band’s stage presence were vibrant, engaging and a blast to be a part of.

Under the cover of darkness, Caspian appeared on stage. An established post-rock band from Massachusetts, they pulled mainly from their 2015 LP Dust and Disquiet. They played under washed-out white lighting, creating a brooding atmosphere that changed from pitch black to blinding with the movement of the music.

The World Is a Beautiful Place & I Am No Longer Afraid to Die put out their latest LP, Harmlessness, in September. Having borne the standard of the emo revival for a few years, Harmlessness sees them explore new territory. They’ve incorporated more than a little pop-punk influence while sticking to their emo roots, paralleling improvements in their production technique. TWIABP has always had a talent for weaving eight-plus musicians into a seamless musical quilt onstage, but that distinctive interplay has finally been fully realized on tape by their guitarist and producer/engineer Chris Teti. Harmlessness is more spacious, more carefully arranged and mixed and a total joy to listen to. Catalyzing this change was the departure of vocalist Thomas Diaz, resulting in the voices of David Bello and the Shanholtzer-Dvoraks coming into focus.

Seeing TWIABP live is a wonderful experience, but Derrick’s stage banter brings the real magic. Derrick leans on good-natured sarcasm, chiding the audience and seeing how far they can take the “this is our last show” routine, but a moment of real sentiment came close to the end.

“Listen…this is sick. Thank you all for giving a shit. We started this band six years ago in my house…real drunk. The goal was…’let’s make Taking Back Sunday money’. It didn’t happen, but this is a good stopping point. Thank you for being here to celebrate the release of our record we played three songs from.”

The Island of Misfit Toys

CT shows to drop in on before the end of February