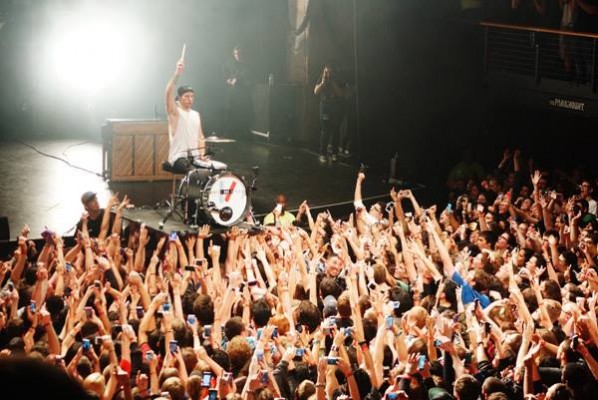 Despite the bad weather that plagued much of the United States, New York Avenue in Huntington looked like a parking lot on the first day of summer camp. Hundreds of middle and high school students standing in line indifferent to the rain while others by the car-load got dropped off in front of the venue.

It’s a scene typically reserved for when The Wanted comes to town or when Brand New play a homecoming show. This particular Tuesday was twenty one pilots, NONONO and Hunter Hunted.

Hunter Hunted was a fantastic addition to the tour and a great treat for those who could appreciate the stylistic difference compared to twenty one pilots. Besides an early cover of “Where Is My Mind?” (which, to be honest, was one of the better versions of the song I had heard yet left the young crowd puzzled and confused) their set list included the tracks from their EP and their upcoming full-length that is in the works. Their violinist was a stand-out musician and certainly set the bar very high for the night.

Following Hunter Hunted was NONONO who made the appropriate transition between the orchestral undertones of Hunter Hunted and the 1.5+ hours of twenty one pilot’s energy. Word-of-mouth informed me that the group was rather exceptional and since they traveled the long way from Stockholm to tour, many in the crowd gave their undivided attention. At only 2 years old, the band has already been signed to Warner Music and have a dynamic and alternative rock sound that can please fans of other genres.

twenty-one pilots is an Ohio-based duo comprised of Tyler Joseph and John Dun. The duo’s first two albums were self-released and the group’s latest album Vessel has been picked up by Fueled by Ramen. Since its release, it has peaked at #58 on the Billboard 200 and even #10 and #15 on the Billboard Alt. and Billboard Rock charts respectively. See the first ten minutes of their live show and you’ll understand not only why Vessel is successful but why the duo is a sought-after item for music festivals around the globe. (this year alone has them doing Firefly Music Festival, Summer Sonic in Tokyo and Forecastle Festival among others) The lights went out and in a whirlwind of energy and organized confusion, Dun climbed onto an elevated drum platform while Joseph greeted the crowd a-top an upright piano. The group opened into “Guns for Hands” and flowed into several others. The group adorned their iconic ski masks (see Tyler, The Creator, Pussy Riot, Beyonce) and even went as far as having “wardrobe changes” throughout the first half of the set.