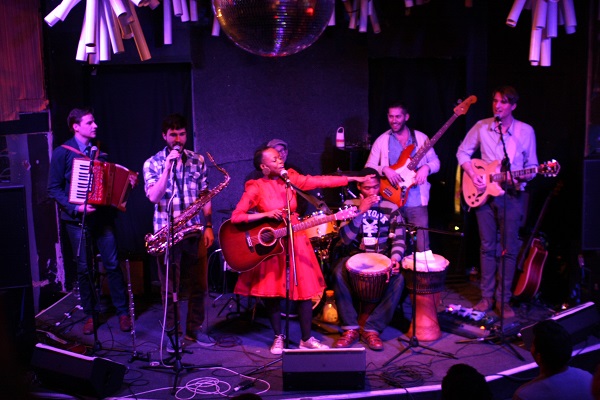 A mini Tribe is a Brooklyn based art collective and independent record label, with an erring towards folk and worldly jams. I stumbled upon a show they curated earlier this month at Glasslands. The show was a coming together of local artists, headlined by Tuelo & Her Cousins.

I missed most of first opener No Valley!, but was in time for Swaai Boys’ full set. I found myself really enjoying this group’s take on the tropicalia genre. A four piece rock act, they project comfy visuals while creating fairly deliberate jams. They put out their debut EP last year that’s well worth a peek; plus, it’ll be weather appropriate here in a month or so!

Tuelo & Her Cousins, fronted by singer and guitarist Tuelo Minah of South Africa, really did the showcase justice. The music falls somewhere into the genre of American soul, but with definite inspirations from home. The group totals seven musicians in all, filling the Glasslands stage from left to right. When all instruments were firing along with their vocal harmonies, it was hard not to smile at the result. The merry group had a self titled album released last year.

Steady Sun, a band featuring some of the mini Tribe, closed out the night with a burst of upbeat indie rock. The group is a four piece, and includes a dedicated keyboardist. Their latest release is 2013’s Good Evening, which definitely sounds a little more chilled out on record than what I heard on stage from them. They made for a fine follow up to Tuelo and conclusion for the evening.