TOY Finally Made It to NY, Played Glasslands 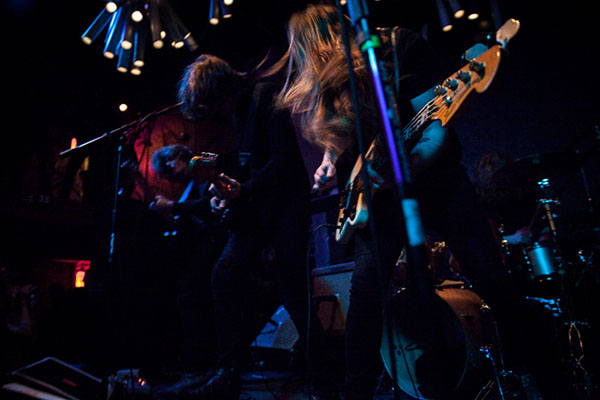 TOY delivers the kind of psychedelic rock that one can headbang and thrash to live. They lit up Glasslands this past Thursday in support of last month’s Join the Dots, their sophomore record. Previous touring attempts through the US were shuttered last year due to visa issues, which actually made this evening their first show here in NYC. Also on board for the evening were Feathers and Young Boys.

Young Boys is a local act that falls in the realm of garage punk. The five-piece’s components include guitar, bass, drums and synth, with a frontman who focuses on antics as oft as his guitar. I could definitely see his attitude cultivating some fun live shows as they pick up steam. Check out their debut, New York Sun.

The tune changed to synthpop for Feathers’ set, previewed more in depth here. Live, Anastasia Dimou expands her project to a cast of five who shine with alternating backing vocals and harmonies. The focus of Feathers is clearly on the visual, with Dimou front and center dancing and singing upon a lighted platform. She also released a new EP yesterday, Only One; we heard the upbeat “Wild Love” from it which got a solid reaction.

Not a moment was wasted once TOY set things off, as wave after wave of their psyche jams crashed down upon the audience. The quintet’s instruments all were synced together in a tight package and singer Tom Dougall’s lyrics were delivered with an extra snarl that really made things come alive. Their music ramped in intensity until hitting a peak crescendo with their closer and latest single, “Join the Dots“. The set ended with Dougall’s guitar left discarded on an amp, droning on, endlessly.