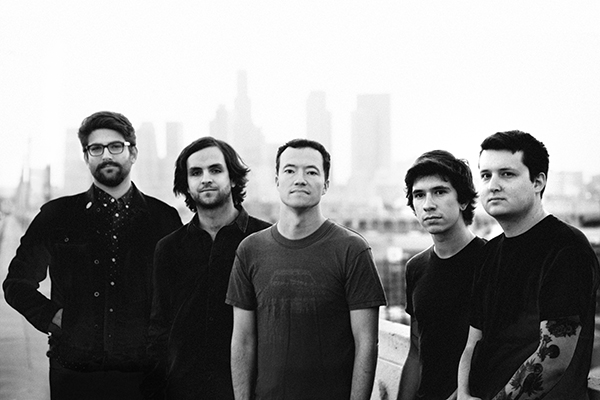 Rising stars Touché Amoré brought their tour to a sold out crowd at (Le) Poisson Rouge, with co-headliners and runaway circus train-car drivers MewithoutYou. Proof of an evolving hardcore scene meant to include every fan with a set of vocal chords, (as some will refer to as “girlfriend hardcore,” a term I’m actually starting to love because why should boys get to have all the fun?) these two bands stand as testament to the fact that if you love something enough to get excited, chances are there will be plenty of people there to get very excited about it with you.

Starting off the night was Caravels, setting the tone with an atmospheric sense of gloom. Priming the crowd with their scream/shout vocals, this band fit the bill perfectly. Seahaven came on next and took me by surprise. Their sound edges on the side of pop-punk, but was heavy enough to get heads nodding. The crowd was attentive for both acts, but anxious for the headliners to start.

MewithoutYou abandoned their usual blend of spiritual folk and post-hardcore for the most physically aggressive set I have seen them play in years. Making a return to their sing/scream/talk roots on their last album, they continued this theme opening with “February 1878.” Gone were the slow, serene interludes like “Brownish Spider” which are usually incorporated into the set. It was clear that the band had altered their usual repertoire to appeal to the audience members that crossed over into Touché’s fan base. Singer Aaron Weiss stage dove during their last song “Bullet To The Binary,” a rare gem from their very first album A—>B Life. Their newer material continues to sound fantastic mixed with the old, and any fan will tell you the adaptive nature of this band makes them better as the years go by.

When Touché Amoré took the stage, Jeremy Bolm and company held court over the madness plowing through a set list of over 20 short but power packed songs.  During new tracks like “DNA” and fan favorites like “And Now It’s Happening In Mine,” the crowd screaming along with every word was as loud and clear as the vocalist himself. It’s clear why this band has received such great reviews, their live performance an uncompromising force to be reckoned with. Closing the night with the slow burning “Condolences,” Touché lyrically addresses an over-arching theme:

“If what’s more important, is the music played/Than who’d attend/We are the same.”

Touché Amoré is likely on their way to similar veteran status as MewithoutYou. Some might get put off by the attention Touché has been getting lately, but catch them live and you’re likely to get swept up in it too.