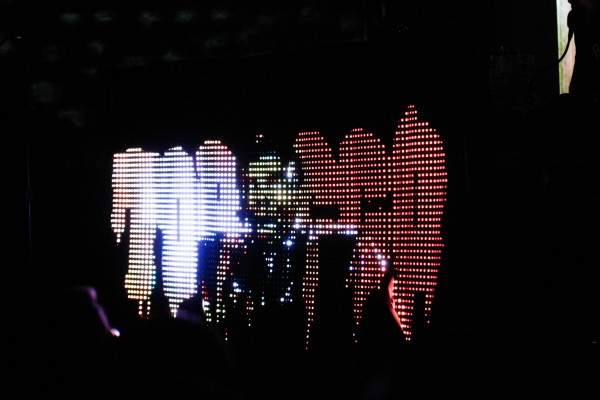 Embarking on his largest tour yet was Tobacco, following the success of Ultima II Massage, which he released earlier this year via Ghostly. The electronic musician’s NYC stop on tour hit Brooklyn Bowl, bringing out a cavalcade of strange revelers to enjoy the evening. Tobacco, and his main project, Black Moth Super Rainbow, have each earned their individual places as highly unique artistic projects, and have cultivated a very dedicated fan base that filled the venue.

Frequent collaborator Zackey Force Funk opened and closed the evening. Early, the Arizonian hiphop emcee worked the stage solo and then in Tobacco’s encore, returned to rap with him. Together, they make up the duo of Demon Queen, who put out an EP last year, Exorcise Tapes. He goes for a funky, nearly absurd sound and backs it up with an expressive presence. He released his third album, Money Green Viper, just in time for the gig.

The Stargazer Lillies, a trio under Graveface Records, are also on this length of tour with Tobacco. It’s been a while since I’ve heard them, having witnessed them only when they supported BMSR in their last visit to NYC in late 2012. The group sounds great, with an assertive instrumentation in front of soft vocals that puts them somewhere deep in the realm of shoegaze. Their latest effort is last year’s We Are the Dreamers.

Tobacco has one more stretch of tour currently announced for September, which streaks across the West Coast before meandering to the midlands of America. Tobacco’s merch is among the most compelling of any artist out there, this year featuring hand-dipped vinyl which I was lucky to score. I’ve included shots of two of those records in the gallery below.