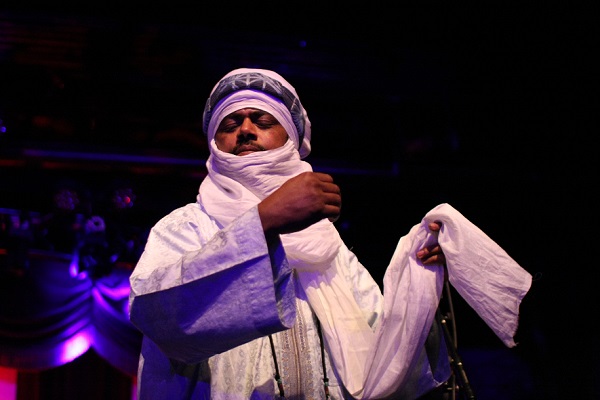 Few bands can offer a more interesting origin story than that of Tinariwen’s. The band hails from the deserts of Saharan Africa and originated near the end of the 70’s amidst conflict in the region, and is now a multi-generational collective that resides in Mali. They have been regularly outputting music that channels the spirit of the region into something that could be appreciated by fans of the American blues and folk genres. Tinariwen recently released a strong new album, Emmaar (Tuareg for “heat upon the breeze”), and are touring in support of it in what was one of the better shows I’ve been to in the past year. I caught the second of their two at-capacity shows at Brooklyn Bowl.

The group of seven musicians that comprise Tinariwen live on this tour all are garbed in colorful robes, and most are also masked. Beyond their striking appearance is a large focus on percussion via the hands, with no traditional drumkit present on stage. The band had a rotating cast of three lead vocalists, who when not providing a face for the band, would focus on dance, backup vocals and rhythmic claps. Tinariwen succeeded in fostering an active audience for their quite long set.

The Melodic, a London folk quartet who are labelmates with Tinariwen in the US via ANTI-, are supporting them on this tour. The group released their debut album last year, Effra Parade. Their worldly instrumentation felt like a fresh take upon the folk genre. Beyond the good string work and vocal harmonies, the harp and melodica are also prominently featured. The Melodic will continue touring west with Tinariwen, but will return to NYC for a solo show at Rockwood Music Hall on 4/22 before returning to London.

handclapping has its place in tinariwen's music but the gourd player is playing a "drum", just not a drum you may be familiar with.think of it as a malian version of the 5 gallon upside down plastic pail youve seen played on streets all round nyc...they even played cler achel which goes back to aman iman:water is life.saw mondays BBowl show and it was one of the best performances ive ever seen them do.

Thanks for clarifying that, BT. Glad you also enjoyed the show! It was my first time seeing them.