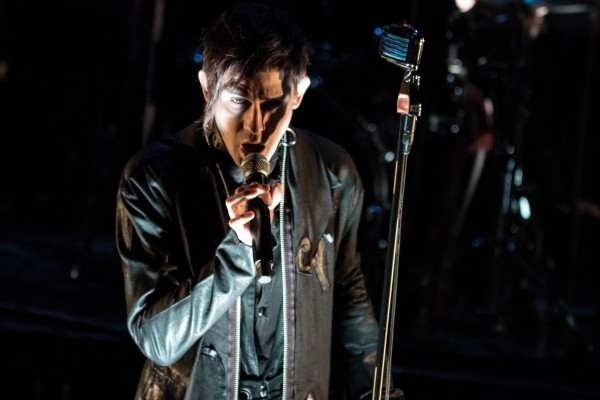 The experimental opera-rock hybrid known as Timur and the Dime Museum (TDM) returned to NYC to finally tour their ambitious COLLAPSE project last weekend. I went out to photograph a night of their trio of runs at Brooklyn Academy of Music’s niche Fisher Space. We’re big fans here at Neat Beet, so do check out our interview with the band earlier this month for some sharper insights into their mythos and motivations.

COLLAPSE, billed as a post-ecological requiem, is not as blunt about the environment as one would expect. A lot of the songs tackle the planet’s plights at our hands with inventive, complicated concepts, but except for obvious references such as, “Breathe in deep, the CO2,” one may not notice at first listen without glancing at the lyric sheets. This made for an enjoyable performance, but I’m confused about if I’m to feel a call to action. We’re left to take our own direction from what we experienced, with little dialogue from the performers about our experience.

One oft-repeated lyric that’s burrowed into my mind now from my heavy exposure to COLLAPSE is “All I want, and all I need is you”. Its said in voices both sinister and mournful throughout. I surmise that it is to reference the duality to our short-sighted lust for natural resources and our cries when we realize the cost of its extraction to our wellness.

The visuals offered were fairly abstract. They included recorded scenes themed to each song that conveyed a mood, but not a message. Each performer, most often the dramatic Timur, were projected live with a glitchy aura vignetting their actions. For Timur especially, this occasionally gave me chilling remembrances of Richard D James‘ sort of grins.

Overall, COLLAPSE live doesn’t come off as more than a rock band performing in a theatrical setting, not that the evening was lacking. I question the choice of venue; as a regular at packed, general admission clubs, BAM is an odd locus for me. With the energy that TDM outputs, being confined to a seat left me feeling like I was in a golden cage. Seems that that’s the challenge of existing between worlds where you’re proper for one or the other. As a rocker, I’d love to see this type of performance more often on my kind of turf, but I’m grateful for the opportunity to dabble with a bit more civility than usual too.

COLLAPSE will be released as TDM’s third record, independently, later this Autumn. Check out the band’s music video for “Heat, Beat and Treat”, and keep your eyes peeled for another on “Cobalt Blues” soon.