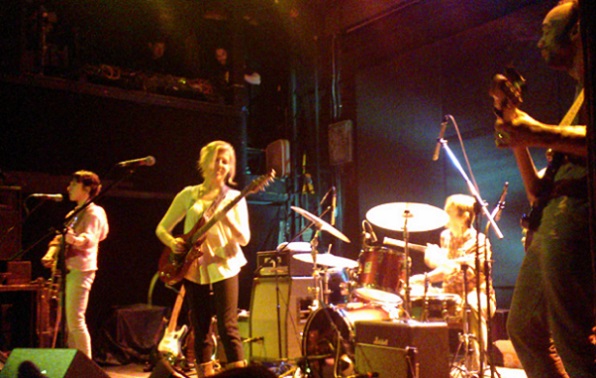 10 years went by without a new release from New England indie rock group Throwing Muses. Their entire life cycle has seen its ups and downs with its fair share of departures and hiatuses. But 2013 brought a new full length release in Purgatory/Paradise and their first tour dates in over a decade. What was special about their show last Sunday at The Bowery Ballroom, their second of the weekend after the same setup Saturday night, is that it reunited the band with former guitarist Tanya Donelly, who had left the group in the early 90s for bigger roles with The Breeders and Belly. More importantly, Donelly joined Throwing Muses and her stepsister Kristin Hersh for a handful a songs.

Donelly was the opening act, having performed her solo material with support of her backing bandmates. Even with her days with The Breeders and Belly behind her, Donelly’s vocals remain strong. Her performance set the table very well for Throwing Muses, and left you assuming that there was no way she wouldn’t return to the stage later on with The Muses.

Hersh and Throwing Muses have come a long way since their inception. The new material is darker than what they’ve put out in the past. Hersh’s guitar work has become more grungy over the years, and her voice more raspy. The band had a certain seasoned appeal about them. They covered a great deal of the new album’s meat. All of my favorite tracks were included, like “Sunray Venus”, “Slippershell” and “Static”.

The encore was a satisfying mix of old school jams and had them concluding the show on a high note with 1995’s “Bright Yellow Gun”, one of their more high energy offerings of the night. It is very good to see this band out and about again, especially because of the collaboration with Donelly.