Three Nights With The Cribs During Their Different Angle Residency 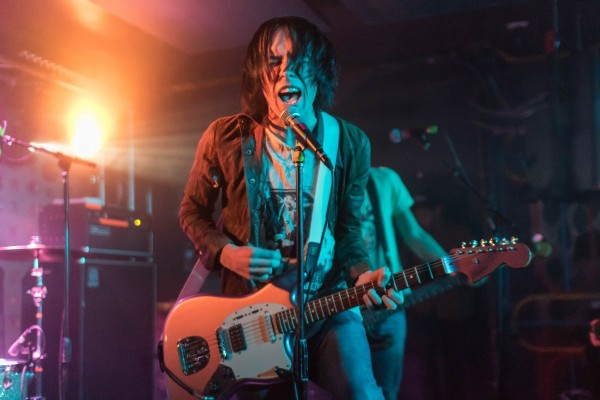 At the top of my list for hard hitting rock bands who put on an absolutely killer show are The Cribs, Britain’s premier garage rock trio. The trio have a new record out shortly, For All My Sisters, and initiated a three night residency in some of NYC’s happening small venues, billed as the Different Angle Residency. Those shows occurred at Mercury Lounge (3/11), Baby’s All Right (3/13), & Saint Vitus (3/14); all were sold out.

The band had been relatively quiet here in the US the past three years, not having played NYC since June of 2012 following the release of their last record, In The Belly of the Brazen Bull. So naturally there were a lot of Cribs fans with pent up energy that needed to let off some steam. I was frenetic at every show and that eagerness only grew knowing what sort of atmosphere I’d be entering. Each night’s setlist held a few great gems unique to each night.

The Cribs’ second gig, at Baby’s All Right, would prove to be the wildest of the three and the show to be at; I was fortunate to have chosen that night to photograph. Crowd surfers and moshing were in abundance for the petite venue, whose ceiling was damaged during the night’s madness. The Cribs responded in kind to the organic energy by giving it their all, and venturing off their setlist with a special semi-acoustic rendition of “It Was Only Love” that the crowd handled vocals for.

Mercury Lounge’s gig was the tamest of the three nights, never approaching a boiling point. Signs were similar that Saint Vitus’s gig would be equally mild after their opening single, “Our Bovine Public,” had little impact on the audience. Guitarist Ryan Jarman opted to taunt the audience to not be “fucking boring” and dance a little, and got the reaction he was hoping for, and maybe then some as multiple beers flew at the front as soon as “Come On, Be a No One” started. Overall, I’d say his gambit worked, the energy level spiked immediately after that and stayed constant the rest of the gig.

This morning, The Guardian released an album stream of For All My Sisters. Having heard half the new record at these shows, “Pink Snow” is what really stood out for me. The track is the longest The Cribs have released, clocking in at 7:12, and the fact that they saved it for a choice slot every night makes me believe they know it’s one of their best as well. It lead right into the final flurry of hits that closed out each gig. The Cribs never played an encore during their residency.

Philly’s Cold Fronts opened all three nights. The amiable rock quartet totally won me over with three nights of solid supporting; by the last night I was shouting their lyrics. Lead singer Craig Almquist definitely has the charisma and was a treat to watch. I especially dug their out-of-the-garage cover of “Can’t Take My Eyes off of You.” The band have an EP out from last year, Forever, via Sire Records.

For All My Sisters comes out on the 23rd via Arts & Crafts, and The Cribs will be following that up with another record next year. Supposedly it will be on the punk side for contrast with For All My Sisters‘s pop focus (not that it lacks an edge). It bears likely that we’ll see them play a gig or two more here before 2017. In the meanwhile, they’re down at SXSW. Cold Fronts will be there as well, but are also back here on 4/21 with Made Violent.