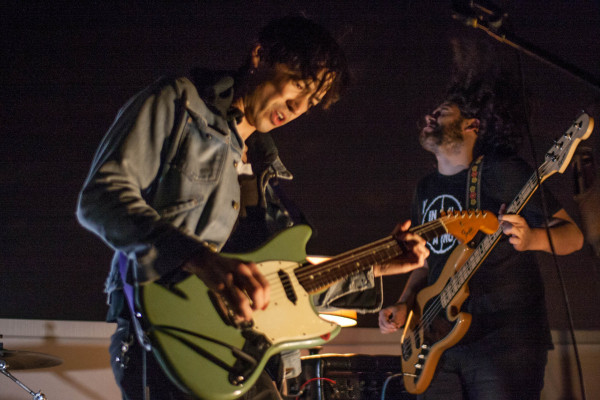 Have you heard of No Home Gallery? The project is a wandering arts gallery that pairs visual artists with residences, taking over the space to showcase their art, and has had a successful run so far this year with no plans on slowing down for 2015. They don’t usually include live music, but some strings were pulled at their last stop in Bushwick which resulted in a cast of bands performing in the crisp night air. No Home’s next event is tonight, entitled EXPOSURE(D), it features a focus on photography & videography. RSVP here.

First up was Hatecave, a harsh orator backed by industrial electronica. Following was Samuel Boat, the solo project of Samuel Lisabeth, who we’ve actually caught prior as the guitarist of Spooky Dangerfield (I had to dig deep in the annals for that one.) Headlining was The Yin Yangs, a thrashy local trio. They had just emerged from the rigors of CMJ, badges still dangling from their necks, and played a fairly furious set to close out the night.

Sorry, Max: Imogen saw your YinYangs photos and just called you the "other Gerry". She loves you, truly. Just remember she's only 6! See you soon, I hope, Betsy.