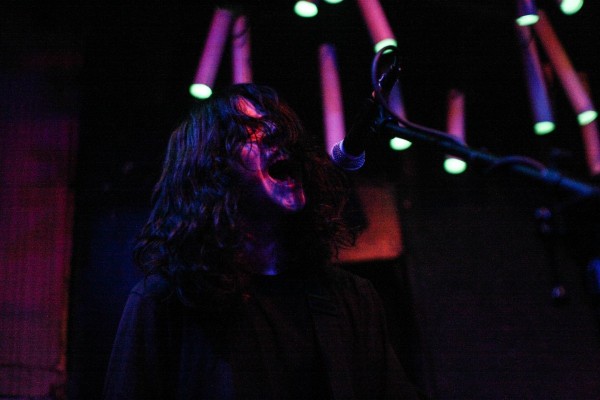 One of the more demented sounds I’ve heard this year comes from Brighton, England. The Wytches are a three piece outfit with a twisted take on surf rock. Metaphorically, think of dragging nails across a chalkboard in a beach house basement. They stopped in at Glasslands and Mercury Lounge last month for their first shows here in NYC on the tail end of a brief American tour.

The Wytches are Kristian Bell (guitar/vocals), Gianna Honey (drums), and Daniel Rumsey (bass). The energy the trio projects seems to operate at a barely contained level; there is a lot of furious instrumentation and expressiveness. I would like to see them erupt and engage the audience more in future gigs. The release of their debut, Annabel Dream Reader, this month is one of my more anticipated items this year; with it, we may see that needed resonance to boost them up in stature.

SLAVVE and Heat opened the gig. SLAVVE are a local duo of Chuka Chukuma (vocals/guitar) and Marcos Marchasani (drums) with a self-titled debut released earlier this summer. The furious energy of the team is not to be undersold, and is worth a peek live. With some refinement to their snarl, I could see them fanning the flames of some seriously chaotic audiences.

From Montreal hailed Heat, a four piece rock outfit with a relatively chilled output compared to their compatriots this evening. Not that at all was a bad thing, I found their music quite melodious and relaxing; a bit of a throwback to the greater generations, if you will. They released their debut EP in June, we’ll be keeping an eye on them.