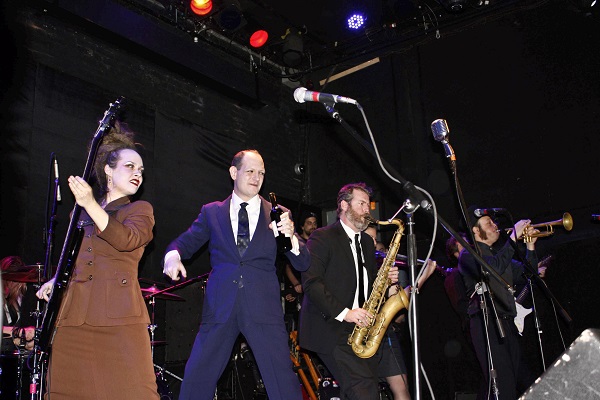 There is nothing in this world that can compare to seeing the The World/Inferno Friendship Society live. This past October at Hallowmas (The Inferno’s annual Halloween extravaganza and arguably the best show of the year,) we got a glimpse of new material off the forthcoming album This Packed Funeral, which has no official release date as of yet. Kicking off 2014 with a string of shows in the tri-state area, The World/Inferno came to The Bowery Ballroom loaded with free CDs of the title track for fans eagerly awaiting the latest album in their enormous arsenal.

A little bit of background on this band: WIFS has been a band for about 20 years and has had over 40 official members. It is nearly impossible to photograph all the members of this band at once, which is why I mostly got shots of Jack and Sandra. Their sound is a glorious combination of old and new, and seeing them live can be summed up by a popular chant their fans will start, “TONIGHT/WE’RE GONNA/FUCK SHIT UP!”

Opening the night were the Fighting Jamesons, a true family band (though it is unclear if any of them are actually related). This dapper band of pirates deliver traditional Irish folk, amplified with an aggressive and all consuming need for alcohol. There is nothing better than knowing the openers are just excited as you are to be seeing the main event, and the Fighting Jamesons were clearly stoked. More than a few of the members were right there in the crowd stage diving during the Inferno’s whirlwind set.

Kicking off the evening as they usually do with “Tattoos Fade” (performed here in 2007 with an older lineup) the crowd responded with near hysterical enthusiasm to Jack’s crooning. Jack, cradling a bottle of red wine the entire time, took multiple dives to which the crowd responded with bursts of confetti and glitter. Do these kids carry it in inside their pockets? I can never figure out how they ration it to last until the very end. About halfway through the show the room hit fever pitch when the Inferno launched into “Me Vs. The Angry Mob” (seen here in Florida with a human pyramid instead of a mosh pit) one of their most contagious songs and an absolute mess to see live.

The band wasted no time coming back for an encore, with Jack and Sandra performing an acoustic duet of the short and sweet “Please My Favorite Don’t Be Sad.” The rest of the members came out to plow through another few songs, then packed it in for a night of hard drinking and merriment. Big thanks to Jack and the whole crew for being absolutely adorable and smiling in nearly all of my pictures. Also cheers to every member of the crowd who avoided stage diving into my camera. Cats always land on their feet, Infernites pick each other up.