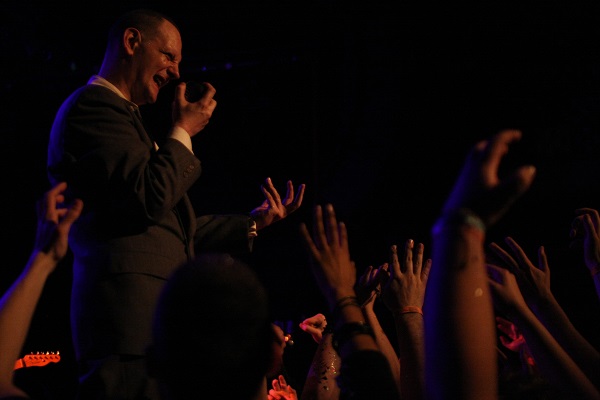 I’d have to rack my brain hard to think of a crazier party than that of The World / Inferno Friendship Society (WIFS) in concert. Their fans, who dub themselves Infernites, conspired to turn their Brooklyn show last week into the concert equivalent of a barroom brawl. What impresses me is that for every iota of effort the fans give, WIFS returns it amplified. Never before have I seen a band with less of a barrier between audience and performer.

Their singer and frontman is Jack Terricloth, who acts as emcee to the Infernites. He introduced almost every song with a bit of dialogue, a slow and deliberate approach that, at the least, offered us a moment’s respite from the madness. In action, he’d constantly patrol the end of the stage, frequently engaging the most eager fans with a grip of their hands. The brave or lucky enough among them to find their way on stage often sought his embrace or approval before their descent.

The live incarnation of WIFS, which over its long lifespan has become quite amorphous, totaled eight on this evening. A horn section, guitars, keyboard and drums rounded out the roster. Their sound makes me think of what would happen if cabaret and punk rock had a baby, and its easy to see how it rouses their fans to such vigor. The band is hard at work making This Packed Funeral, a follow-up to 2011’s The Anarchy and the Ecstasy, a preview of which was given away to anyone who stopped by the merch table.

There were two openers for tonight’s show. Iron Chic, up second, are a group of men who champion the Long Island punk sound. I always have respect for bands on support who can still manage to get an audience into a proper fervor like Iron Chic did. They released The Constant One six months ago, the latest in a long string of releases, and just wrapped up a US tour for the album. They are now continuing their misadventures in Europe.

Before them were The Bad Doctors, a trio of Philadelphia post-punkers. They sound like they just emerged from the eighties via time machine. Lyrically, they evoke its sci-fi themes, and sonically, heroes of the era like Billy Idol come to mind immediately. The band’s preparing to release their debut album, Burning City, this year, and have an EP, Re Animate, available now of songs from it.