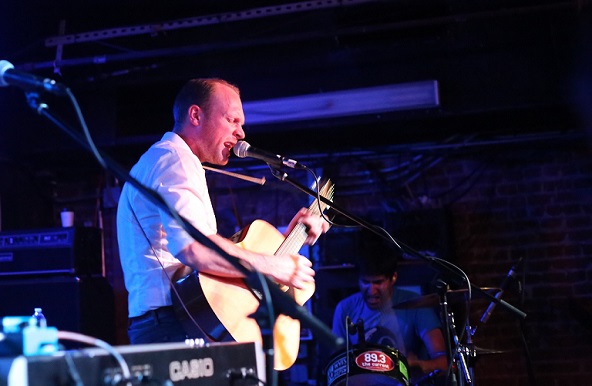 Nearly three years removed from the release of their second LP, Departing, The Rural Alberta Advantage paid a visit south of the border to tease us with a brief look at some of the new material they have in the works. After a night at Glasslands in Brooklyn, they played an early show and a sold out late show last Thursday at Mercury Lounge. Here’s what I caught at the early show.

Fellow Canadians, Grey Lands, opened the evening. The two man initiative came across a bit green, albeit performing their second live show ever. The project was heavily based around guitar antics and keyboard, to cover bass and drums. Adding a third dimension to their lineup would supplement their stage presence, but they have plenty of time to further develop their sound.

The RAA delivers a distinct hard folk rock sound. Amy Cole provided backing vocals and skillfully manned the primary keyboard throughout the set. She cycled through a series of percussion support items that ranged from drumstick clacking to a xylophone. Paul Banwatt’s high energy on drums contributed to their “harder folk” image. He was particularly fun to watch on the faster-paced songs like “Stamp” and “Drain the Blood”.

Spearheading the efforts, lead vocalist and guitarist Nils Edenloff, would switch from guitar to keyboard here and there. Towards the end of the set, he flew solo for a performance of the melancholy “Two Lovers”. Had he played unplugged, I think it would have been even better, but it was still a cool little bonus for the evening. The RAA also doled out a taste of what they’ve been up to of late and it’s definitely up to par. We’re sure to learn more about the new material on an official basis as the year goes on.