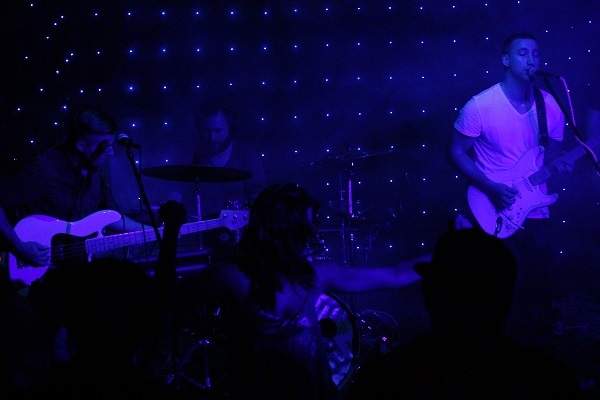 I had caught wind of Louisville’s The Pass recently and made sure to see them live this week at BAR New Haven. They were in town in support of a brand new LP released on Tuesday entitled High Road. I was drawn to their synth pop sound, which was just as digestible live as it is through headphones.  A pair of new tracks, “High Road” and “All The Reasons”, were set standouts and could fuel a buzzworthy future for the band. “High Road” takes a sweet approach that concludes with a euphoric electronic blast. “All The Reasons” diverges for a more toned down beat with mellow undertones.

They’ve now banked enough catchy material to push forward on tour to garner more national attention. And it’s worth noting that the second song of their set, an older track called “Halo“, is one of the catchier songs of stumbled upon this year. The falsetto vocal hook of “she came to me and I could see her halo” solidified my intrigue with The Pass.

A pair of local artists opened the show. The first was Glamour Assassins, who played a set of dance rock fueled by synthesizers and powerful vocals. The focal point of the set was definitely their debut single, a track called “Phantom Of The Disco”.

Pop rock singer-songerwriter Ian Biggs also performed. I had only heard his name in the past associated with nothing but good things. I was able to learn exactly how talented he is. He’s very skilled on the guitar, and his lyrical ability is on point, especially with a new track of his called “Head In The Clouds”, which will get plenty of local attention. He was armed with an excellent backup band featuring members of Tanooki Suit and Fake Babies, both of which we covered at Fauxchella CT back in May.