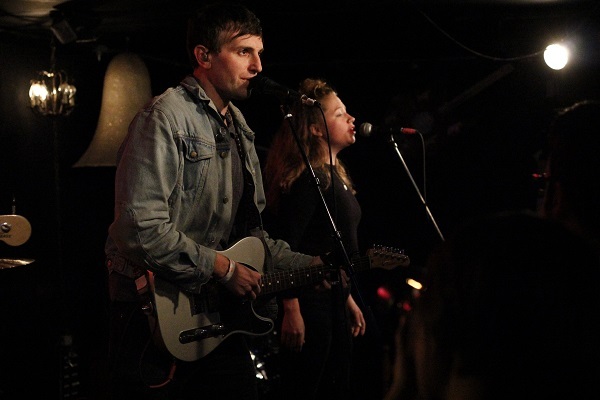 I fell in love with Days of Abandon back in May this year. The Pains Of Being Pure At Heart‘s third full length LP marked a radical departure, ditching their fuzzy angst of old, for new sweetly somber elements. The band experienced changes in lineup over the years, hence the change in sound, and here they are today. They were cool enough to take a quick break from their tour with The New Pornographers to drop by The Space in Hamden, CT this past Tuesday night.

Fronted by guitarist/vocalist Kip Berman, who enthusiastically signed all our brand new vinyl purchases post-show, opened the band’s set and encore with a pair of solo performances. His soft, yet powerful vocals have held this band together and made for some killer harmonies during their set. They covered plenty of ground, giving solid treatment to their latest album as well as material of old. New favorites “Simple and Sure”, “Kelly”, and “Eurydice” were fantastic to see live, alongside more seasoned tracks like “Heart In Your Heartbreak”. The classic of theirs, “Belong”, was an ideal set closer.

The most satisfying part about The Pains Of Being Pure At Heart on Tuesday was seeing that their ability to evolve musically while retaining the ability to perform tracks from different eras of their discover. I’m personally more into the new, sweeter direction they’ve shot off in, and I believe there’s more where Days of Abandon came from. Kip Berman and company have yet to peak in ability.

They sure do love Call It Arson here in Connecticut. The local group puts a very anthemic rock spin on the folk genre, generating powerful songs, perfect for singalongs of all sorts. They did what they always do best and attracted a strong following despite making for an intriguing and weird billing. The performance turned into a typical singalong with some new tracks mixed in. That’s a great thing, as this band may not be my personal cup of tea, their live shows are a spectacle and an absolute must-see for any CT concertgoer.

Tagged: Call It Arson, Manic Productions, the pains of being pure at heart, The Space