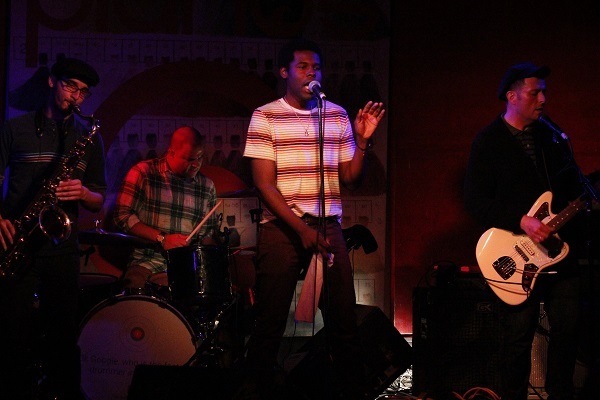 Retro pop rock and soul vibes took over Pianos NYC by the end of the night last Sunday. The Lovers Key has flown under the radar in 2014 with a delightful album, Here Today Gone Tomorrow, riddled with a vintage flair that you don’t often get treated to these days. Visiting from Florida, their stop at the Manhattan piano shop turned bar/music venue marked only their second live date ever in New York on an inaugural tour.

Led by Maco Monthervil providing vocals and guitarist Christopher Moll, the band tore through the majority of their debut album. Upbeat tracks like “Who’s The One You Love?” and “Tell It Like It Is (Don’t Break It To Me Slow)” proved that their musical showmanship is on point. Monthervil’s vocals seemed effortless, flowing with the instrumental rhythm. He was at his strongest during “In A Perfect World”, the slow song of the set, which was powerful and incredibly reminiscent of old school soul. He said we would all enjoy it and it caught the attention of the whole audience.

The saxophone on the studio album was very cool, and Markis Hernandez brought it to life in person, giving some added depth to the live tracks. They closed out strong with “Bright Eyes, Black Soul”, their most aggressive offering. I’ve been feeling the vintage concept lately, and The Lovers Key have got it down pat. It’s only a matter of time before the gain some more widespread recognition.

What’s great about shows at Pianos is that they work more like a live music showcase. I became a acquainted with a handful of cool New York City area acts. Keekwyn & The Hackers was the first group I managed to catch a few songs of. They are an R&B group out of Brooklyn. Keekwyn herself provides powerful vocals and a great range with a jazzy backdrop from The Hacker’s instrumentals. Looking ahead, you can expect an EP from them in the near future.

The Wired Era injected some pop rock in to the evening’s lineup. They performed together has a very solidified unit. Twin brothers Steve and Nick Winiarski worked in sync on their respective guitars. Bassist Rocco DeRose wasn’t shy about interacting with his friends in the audience, tossing an endless stream of guitar picks off the stage for example. Overall their jams were cool, but they would benefit from developing a little something unique to set them apart from others like them.

Singer-songwriter Erika Lloyd was also on the bill. She had previously established her vocal prowess with an indie pop act called Little Grey Girlfriend. Of late, she’s embarked on an effort to create some solo material with the help of a backing band. From behind her keyboard she commanded the stage with gusto and captivated the audience by flaunting a magnificent vocal scale. The strength of Erika’s vocals and the subtle stability provided by her band paired well together. I enjoyed what I had listened to of Little Grey Girlfriend, but Erika no doubt has what it takes to run her own act.

View the complete photo set via this link.