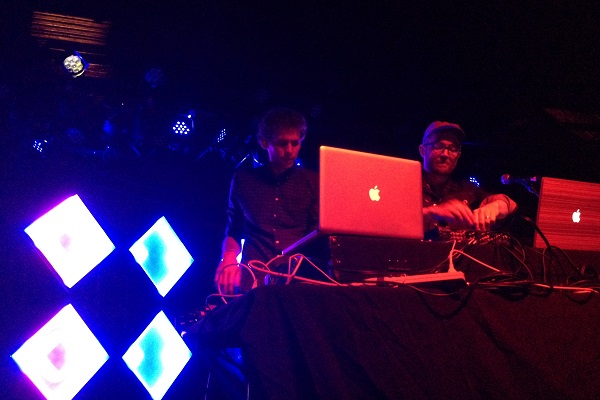 “We’re the Hood Internet from Chicago!” Aaron Blink (ABX) and Steve Reidell (STV SLV) shouted from their turn-tables, as pulsating geometric lights continually flashed to the beat in the background. Without further ado, they launched into their 1 AM set as the crowd, a mixed crew that comprised of Brooklyn Bowl’s late night revelers and dedicated fans, cheered.

To the uninitiated, the Hood Internet are in the business of mash-ups. The two quickly took to their laptops after being inspired by leading acts like Girl Talk. Renowned for pairing completely polarizing genres, such as hip-hop, electro, and indie rock, they embody what great mash-ups are truly about: familiar vocals suddenly made unfamiliar yet swiftly cohesive with initially startling melodies that will get you groovin’.

At any given time during their two hour-long set, gems such as R. Kelly and Phoenix, Crystal Castles and Rihanna, A$AP Rocky and Purity Ring, etc. were played to overwhelming enthusiasm. STV SLV and ABX did an excellent job to keep the audience pumped up, occasionally shouting for us to put our hands up and clap when well-timed lyrics boomed from the speakers, such as “Doin’ It Good” (Kanye West’s “Good Life” and Daft Punk’s “Doin’ It Good”).

As their set went on, the stage area got noticeably more crowded as flannel-clad hipsters started to dance and sing along to more popular tunes, such as “Polish City” (Neon Indian’s bubbly synthpop instrumentals of “Polish Girl” and Tyga’s growly vocals to “Rack City,” a hilarious yet absolutely brilliant juxtaposition).

Despite the crowd calling for an encore and shouting, “One more song! One more song!,” the duo bid them a graceful adieu just before 3 AM. Thanks ABX and STV SLV for putting on a great show as always, and catch more of their material on their Soundcloud.