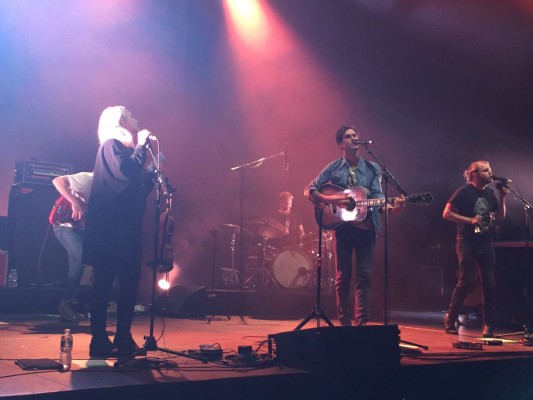 After attending Governors Ball this past summer, there were two acts that I desperately wanted to see again as full headliners. One of those acts was Banks (who visited Terminal 5 at the end of September) and the other was The Head and the Heart. Incidentally, they both played on the same day at Gov Ball, a day which ended up being one of my top musical memories of 2014. Despite being quoted as saying that they don’t play the east coast very often, The Head and the Heart made their return NYC visit on Dec. 2nd, and for those who remembered their show on Randall’s Island (and the rest in attendance), it was well worth the wait.

While it was enjoyable to see them perform their brand of indie folk (a label which really doesn’t do their music justice) outside on a sunny Sunday evening this summer, hearing them play indoors where their blend of pleasant melancholic melodies and heartfelt lyrics echoed through the contained structure of the Hammerstein Ballroom allowed for a much deeper musical experience. The harmonies that co-frontmen Josiah Johnson and Jonathan Russell created along with the wonderfully unique and beautiful vocals of Charity Rose Thielen were meant to be heard as crisply as possible to achieve the impact their music can produce, and that was exactly what the Hammerstein faithful were treated to.

It is impossible to state what The Head and the Heart excelled at during their show, simply because it seemed that every song performed hit all the right musical and emotional chords. It was the live music equivalent of that favorite album you own where you can listen to the whole thing front to back and enjoy every minute of it. We were entertained throughout the evening with popular songs like “Lost In My Mind,” “Another Story,” and “Shake,” and while the audience enjoyed each offering they had to offer, The Head and the Heart gave three iconic performances that set themselves apart from the rest.

The first of which was “Let’s Be Still,” which paired a serene melody with the stirring visual of having everyone in the audience turning their smartphone flashlights on, creating the look of a room full of fireflies. Secondly (and somewhat shockingly), they played their traditional closing song “Rivers and Roads” earlier than usual, but it didn’t fail to connect with the audience, as most people provided hushed backup vocals on what is easily The Head and the Heart’s most powerful song. Lastly, is what they decided to close the show with (“Down In The Valley”), a beautiful and striking performance that now gives me goosebumps each time I hear that song.

All told, The Head and the Heart provided a memorable live show that left a lasting impression on me as we wind down toward the end of 2014. If you have not had the privilege to see them play, I strongly encourage you to make the effort the next time they come to town. You’ll be left with great memories and positive vibes, perfect to warm your soul on those cold winter nights in the city.

The opening act was a Wisconsin-based band named PHOX (pronounced “fox”) who whetted the appetites of the Hammerstein crowd with their pleasant folk-pop stylings, led by lead singer Monica Martin, whose soulful vocals pair perfectly with the sugary soft melodies of the rest of the sextet. It’s unlike pop music you’d hear on the radio, and that’s a compliment, as their music struck to the heart of my deep Midwestern roots, creating a sound that felt like home. Their self-titled, debut LP came out this summer, and it is definitely an album I would recommend picking up if you get the chance. “Slow Motion” is their single—and it’s a lovely one—but you’ll get a much better sense of how talented they are by giving the whole album a listen. Plus, they’re coming back to NYC in February to play Music Hall of Williamsburg, so you’ll have a chance to hear them live for yourself. Take that opportunity.