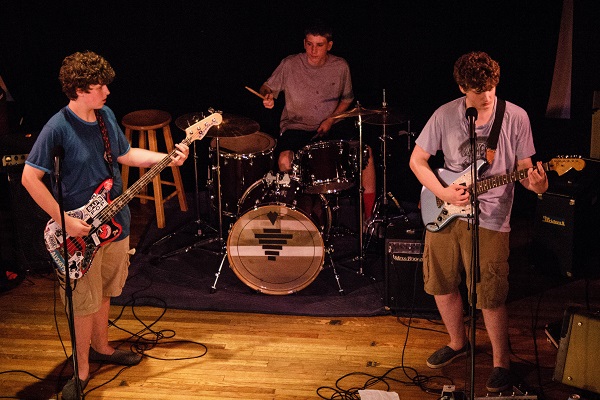 The local scene in Connecticut seems to be stronger than ever and I’m very pleased to present some of my first ever coverage of exclusively homegrown CT artists here on Neat Beet. Last weekend, I took a trip to Lyric Hall in New Haven to catch up with some familiar faces and witness some fresh tunes at The Foresters debut album release party.

Opening the night was The Sleep Cozies. The New Haven trio really brought the noise with their garage-shoegaze inspired rock, absolutely flooding the tiny concert space with fuzz. Thom Hart and Emily Rose each contributed haunting vocals that complimented the aggressive instrumentals very well. Their standout track, “Daughter”, begs to be checked out. Hopefully some new material from them is on the horizon.

The whole night was organized by The Foresters, a trio of Bethany-based teen rockers who were celebrating the release of their debut full-length Sun Songs. You may have heard a sample of this release on our last episode of Beet Box Radio when we featured the awesomely catchy “Machines”. The band is made of up brothers Evan, Hayden, and Liam Nork, who simply love to make rock music. What is so impressive is that these kids have been making music for five years now, aren’t even through high school yet, and still possess all the songwriting and production skills you’d see in any college-level independent band. They do it all themselves, and are at the front of the pack in their age bracket when it comes to the statewide music scene.

As for their live sound, they play with a notable pop-punk influence and churn out fun power vibes with both Evan and Hayden contributing vocals, and the youngest brother Liam on drums. They performed the majority of the new release. The sky is the limit for these kids as it will be interesting to see how they evolve musically over the years given how young they are. Hayden also gave us a taste of his experimental batkhi dahn side project to open the night as well.

The night concluded with a group we’re very well acquainted with here. You’ve seen us cover loom countless times, and now, they are sporting a brand new name. Danielle Capalbo and company are now performing and recording under the name Quiet Giant, which I personally think is a solid reflection of the subtle yet sturdy approach they take to performing. They sounded very polished as always and you can expect to hear some new material from them on Beet Box Radio in the near future.

Thanks for capturing such a great night of music in Connecticut. There is so much great indie music in the state right now. We're excited to be in the mix with so many great bands.